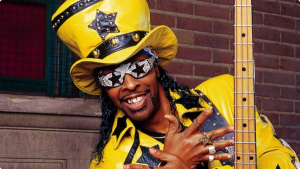 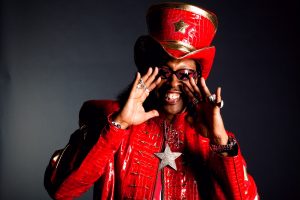 About Bootsy Collins Bootsy (born William Collins, October 26, 1951, Cincinnati) is one of the all-time great funk and R&B bassists/singer/bandleader. He formed his first group, the Pacesetters, in 1968, featuring Phelps “Catfish” Collins (his brother; guitar), Frankie “Kash” Waddy (drums), and Philippe Wynne (later of The Spinners fame). From 1969 to 1971, the group functioned as James Brown’s backup band and was dubbed the J.B.’s. In 1972, Bootsy joined George Clinton’s Parliament/Funkadelic. Collins and Clinton soon established a lifelong personal and musical friendship. He launched Bootsy’s Rubber Band as a spinoff of P-Funk in 1976, the band including his brother Phelps, Waddy (drums), Joel “Razor Sharp” Johnson (keyboards), Gary “Mudbone” Cooper (vocals), and Robert “P-Nut” Johnson (vocals), along with “the Horny Horns”. (He was sometimes billed alone as Bootsy, and sometimes as William “Bootsy” Collins.) Collins’ inspired, clever progressions and patterns were a vital part of such records as “Get Up, I Feel Like Being a Sex Machine.” The group became the House Guests after departing the JB’s, until Collins joined Clinton’s Parliament/Funkadelic empire in 1971. He co-wrote “Tear the Roof Off the Sucker” with Clinton and Jerome Brailey and established himself so effectively that Clinton urged him to form his own band. Bootsy’s Rubber Band emerged in 1976, a spirited ensemble that included Collins’ brother Phelps (“Catfish”), as well as fellow James Brown band members Fred Wesley and Maceo Parker, Joel Johnson, Gary Cooper, Rick Gardner, and Richard Griffiths. (Collins also featured his alter egos “Bootzilla” and “Casper, the Friendly Ghost” as part of the stage act.) Their debut LP, Stretchin’ Out in Bootsy’s Rubber Band, and their second release, Ahh…The Name Is Bootsy, Baby! equaled anything issued during Clinton’s peak period for idiomatic diversity, clever, bizarre humor, and outrageous lyrics. Both Ahh… and the third LP, Bootsy? Player of the Year, earned gold records and made it into the Top 20 on the pop charts. The single “Bootzilla” was his lone R&B chart topper in 1978, although “The Pinocchio Theory” also made the Top Ten. Collins recorded as both a solo artist and with the Rubber Band in the ’80s. He also did some special projects, such as a 1984 collaboration with Jerry Harrison of Talking Heads — using the name Bonzo Goes to Washington — that produced “5 Minutes (C-C-C-Club Mix),” featuring Ronald Reagan declaring nuclear war on the Soviet Union over a skittering rhythm track. In 1988, he returned on Columbia with the appropriately named What’s Bootsy Doin’? In 1989, Bootsy was a member of the Bootzilla Orchestra on Malcolm McLaren’s album Waltz Dancing. One year later, he became a featured guitarist and bassist with the dance music trio Deee-Lite, signed with 4th and Broadway, and also toured England with a group co-led by Parker and Wesley. Bootsy’s New Rubber Band released Blasters of the Universe in 1994, and Fresh Outta ‘P’ University followed four years later. Numerous Collins live shows and reissues appeared as the 21st century opened, and in 2006, the bassist actually released a Christmas album, Christmas Is 4 Ever, on Shout Records. In 2011, a conceptual album, The Funk Capital of the World, landed, featuring everyone from Ice Cube to Samuel L. Jackson on the guest list.  In 2017, the highly anticipated album World-Wide-Funk, will be released featuring various artists ranging from Snoop Dogg to Musiq Soulchild.