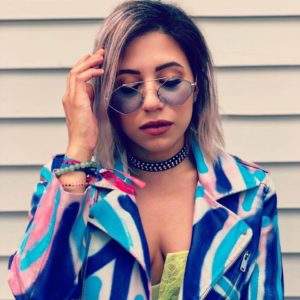 It was bold to move from sleepy Rhode Island to New York City, but singer-songwriter Bria Lee was determined to fulfill her artistic potential and took the leap of faith. Upon arriving on the thriving Gotham music scene, she soon found herself aimless in an 80-hour grind. Between waiting tables and working at a pizzeria, Bria wedged in restaurant gigs.

Bria’s signature aesthetic is eclectic, but hallmarks of her artistry are a sensually emotive sensibility that fuses a splash of hip hop, rhythm & blues with sublime, edgy pop. It would be one fateful record label showcase that changed everything for her. After the once-in-a-lifetime opportunity, Bria signed to Republic Records, and issued a brace of vibrantly expressive singles, featuring guests artist like Fat Joe and Pitbull. Recently, she performed at NYC’s Fashion week for designer Andres Aquino’s collection, and she sang the national anthem for the Jets vs. Patriots game. Bria now steps forward with her seven-song debut EP, Little Room.

Bria sang before she could talk, and, through hard work, made good on her gifts in music. Growing up in a musical household in Providence, Rhode Island, her mother sang and played guitar and her father was fascinated with artists and musicians. It was a warm and nurturing atmosphere that allowed Bria to hone her prodigious talents. Her father would drive her to lessons and auditions, and he always urged her to not let her God-given talents go to waste. At the age of 17, she matriculated at New York’s Manhattan School of Music where she studied classical piano, quickly becoming a fixture on the NYC jazz scene as a singer.

Though she prefers not to dwell on it, a galvanizing moment came when her father was sick, and she paused everything to be with him back home in Rhode Island. “My dad and I related to each other through music. When he died, it was too painful to keep doing music—I was heartbroken—but then I found it to be more painful to not do music,” she confesses.

Bria’s musicality fuses the sultriness of soulful singer-songwriters like Amy Winehouse, Lauryn Hill, and Alicia Keys with the bump of hip-hop. It’s a smooth topline set over a grimy 808 thump with touches of jazz and organic instrument for added flair. As a singer, Bria’s soulfulness manages to conjure the smoky expressiveness of a jazz vocalist and the confidence and swagger of a poet.  As a lyricist, Bria favors candor and impressionism, always seeking to capture the moment.

Previously, Bria has issued the intoxicatingly soulful singles “Purple Clouds,” “Piece By Piece,” “One Shot” [feat. Fat Joe], and a new version of “One Shot” imaginatively remixed featuring Pitbull. Her debut EP, Little Room, is a carefully-crafted collection of seven songs written in during about of fevered creativity while laboring in cramped quarters. Select standouts include “Forget Me” and “Nowhere.” The slow-burn track, “Forget Me,” frames her honeyed raspy vocals with elegantly ethereal touches. The overall effect is if a 1950s-style lovelorn ballad mashed-up with a seductive “done wrong” slow jam. “Nowhere” wafts smoked-a-blunt swagger and sleek sophistication courtesy of stately strings. Here, Bria’s sensual vocals convey a deep sensitivity without losing her detached cool.

Reflecting on her path and the future, Bria says, “I will never forget where I came from. I want to stay humble, and work hard.” These experiences have inspired her music, as she continues, “I write about my experiences, and I want my songs to be relatable.  At the end of the day, we don’t want to feel alone. I want to reach people through being honest.”