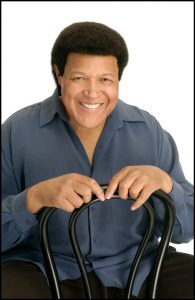 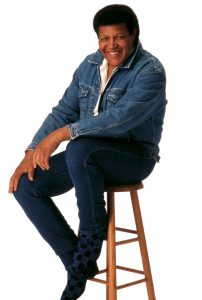 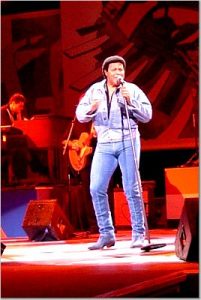 Chubby Checker aka. Ernest Evans was born October 3, 1941, in Spring Gulley, South Carolina. He’s the son of a tobacco farmer. His mother moved the family to Philadelphia when he was a young boy. Chubby is a nickname he got from Tony Anastazi while working at his produce store. Chubby entertained the customers with impressions of Fats Domino, Jerry Lee Lewis, and Elvis Presley. He studied with Dr. Purcheck at The Settlement Music School and formed The Quantrells in the 10th grade. His vocal group began performing in churches as well as on the streets.

Henry Colt brought him to the attention of Kal Mann, who signed him to Cameo-Parkway Records. Dick Clark’s wife, Bobbie came up with the name Checker, a reference to the similarity between him and Fats Domino. Chubby’s first single, “The Class” was a vehicle for his musical impressions and was included in Dick Clark’s ’58 Christmas card. That record was his first hit and reached #38 in Billboard.

Soon after, Dick Clark was looking for someone to record “The Twist,” a song originally written and performed by Hank Ballard. He needed a more commercial version for the kids on Bandstand. After Danny & The Juniors turned down the request, Chubby recorded his version in 35 minutes one evening in July of ’59. The new track shared the same arrangement except for a straighter drum feel and smoother vocal delivery. Chubby Checker’s cover and his accompanying dance routine gave the song new life. It took over a year but “The Twist” went to # 1 in the fall of ’60. He was dubbed “The King of the Twist.”

As a dance sensation, the Twist revolutionized popular culture by giving couples the freedom to break apart on the dance floor. Before Chubby Checker there was no dancing apart to the beat. “The Twist” became the first and only 45 single to ever appear in the No. 1 spot in two different years.

Chubby Checker’s latest release is “Limbo Rock Remixes” which contains a new version of “Limbo Rock” (his # 2 hit from ’62) as well as “The Original Master Of The Dance Hall Beat, ” which is a totally new track that features the New York Rap Group OD & Reggae Super Stars Inner Circle. Earlier in the year this became Chubby’s 10th double sided hit & his 24th Top 40 Record, when it shot to # 3 on The Billboard Hot Dance Singles Sales Chart. Chubby now has a National Chart life of over 48  years. Elvis is the only Rock and Roll Artist with a longer Chart History. Two of these mixes are also featured on Chubby Checkers’ newest full length CD, entitled, “Classics”. It’s a compilation of his Greatest Hits and has been re-mastered for greater sonic quality.

In the August 7, 2004 issue of Billboard, Chubby Checker’s “Limbo Remixes” re-entered the Charts at # 4! In addition to being played on a large number of CHR, Rhythm, & Urban Stations that report to Mediabase & BDS, to date, it has been played on over 60 College Radio stations as well.

Radio Disney has embraced Chubby Checker’s New Limbo by adding “Limbo Rock Remixes” to their rotation on all 60 Stations –  he’s supporting this success (over 15 ,000 spins so far) with appearances for Radio Disney in all Major Markets across the country.

Chubby continues to perform full time and has plans for more new releases – not only as a singer but as a songwriter and producer. He has sold 250 million records over the course of his career (so far). Chubby Checker was the first Black Rock Star, who was not a crossover Artist; he appeared on the Pop Charts with his first record. Because of Industry & Media Bias, his accomplishments & impact on Show Business have been overlooked for years. Dick Clark has said: “The three most important things that ever happened in the Music Industry are Elvis Presley, The Beatles, and Chubby Checker.”