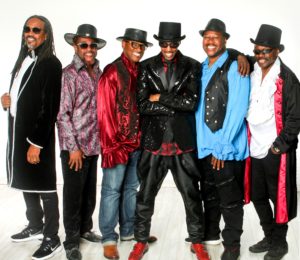 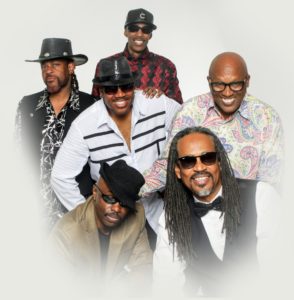 The music influences and the stage presence that gave birth to the legendary group “The Gap Band” flows through the offspring group now known as “Gap Experience” “GapX The Band” (GapX) and its founding members. The names recognized by the Gap Band nation — Oliver Scott, Billy Young, Roman Johnson and Baby Gap unite to come to the stage once again!! Members of this group wrote, recorded and toured the world with The Gap Band and are now bringing the original rhythm and funk back!!

This is no ordinary “tribute band” and The Gap Band nation should accept no substitutes. The original GapX members toured the world and blazed the charts with amazing hits like Outstanding, Burn Rubber On Me, You Dropped a Bomb On Me, Early In The Morning, Yearning For Your Love and Party Train. With newcomers lead singer Max C and Guitarist Marlon McClain, GapX appeals to old and new followers by staying true to the heart of their music classics and infusing contemporary production and styling that produces a sound and live performance show that is undeniably electric.

Oliver Scott is truly one of the music industry’s best-kept secrets. His musical talent was nurtured in the small Pentecostal church he attended as a child in Waco, TX. As a young man his talents blossomed along with his desire to write songs. In 1977 he and his brothers formed the band “Bloodline” while living in Tulsa, Oklahoma and moved to Los Angeles.

Oliver’s musical talents and influence were introduced to The Gap Band in May of 1979 when he auditioned and won a position as trombonist with The Gap Band. His three and one-half years with the band saw him pen the R&B classic “Yearning For Your Love” as well eight other “album cuts” for the group while ascending to the role of The Gap Band’s Musical Director. Oliver was also privileged to have the performance of his song “Where Are We Going” from The Gap Band V album, nominated for a GRAMMY AWARD in 1984 in the category “Best R&B Instrumental Performance”.

Now, Oliver is involved in helping to organize GapX The Band and has reunited former musicians and writers of The Gap Band and, under his musical leadership once again, produces the “sound” that cannot be duplicated or recreated by anyone else.

Keyboardist Billy Young career includes 22 years with the original Gap Band that started in 1981. Billy’s talents and contributions to the Gap Band sound can be heard on Gap Band IV, Gap Band V, Gap Band VI, Gap Band VII, Gap Band VIII, Gap Band – Straight from the Heart, Gap Band – Live from Atlanta, and also such recordings as Round Trip, Live & Well and Y2K Funkin Till 2000 Come. Billy also lent his talents to Billy and Baby Gap – the only spin off group from the Gap Band and produced by Charlie Wilson.

Anthony Walker, aka “Baby Gap”, joined the GAP Band in 1979, performing as a dancer, and contributing as a choreographer and song writer. For the next 23 years, he traveled the globe with the band and performed on Dick Clark’s American Bandstand, Don Cornelius’ Soul Train and Solid Gold. In 1985 Charlie Wilson, lead singer of the Gap Band, produced the album with Baby Gap and fellow GAP Band member Billy Young titled “Billy & Baby Gap”, which was the first album released as a collaboration of members of the GAP Band. The single, “Rock the Nation” hit the charts at #3 with a bullet! Anthony grew up in Chicago, Illinois. During the 70’s he formed the break dancing group “Tidal Wave”. They won multiple awards, beating out leading groups like “New York City Breakers” and others. Anthony also taught break dancing and moon walking in the early 80’s at John Travolta’s dance studio.  During his career, Anthony also collaborated with Rick James and George Clinton, programmed beats for Pebbles, and played percussion on the single “Snoop Upside Your Head with DJ Pooh”. In addition, he worked for Disney as a choreographer.  Anthony is now performing with GapX – the Band and other former members of the Gap Band, lending his talents, energy, his awesome moves, and love for the GAP Nation, the GAP Band funk and his music as a dancer/hype-man/rapper.

Writer, producer, arranger and keyboardist Roman Johnson’s talents run though The Orginal Gap Band. His talents and influences are part of the original sound that evolved while Roman was the Musical Director for the original Gap Band.
He began his time with the group in 1983 and from there went on to have great influence in the music industry with many different artist.

In a world already filled with remarkable vocalists, Charles E. Salter (pka) Max’C is truly in a class of his own. Originally hailing from Louisville “Dirty South” Kentucky USA, Max is a Multi-Talented Singer/Songwriter/Actor/Entertainer, who has spent a majority of the last decades working and performing in Europe.

With his smooth four octave tenor vocal range, and a sound very close to R&B Legend and Gap Band founder, Charlie Wilson, Max will definitely make you sit up and pay attention. Based in Helsinki, Finland for many years, Max became one of the most sought after voices in the EDM, House & Soul music arena. Working with the greats like Swedish House God Father, StoneBridge (“I Believe”), Axwell (“I Found U”), David Guetta (“Where Is The Love”), R3hab (“Sending My Love”), Fedde Le Grand (“Feel The Love”), and so many, many more, Max is now set to hit the next level in his long Career. Having secured the spot as the lead singer of GapX Max is set to make his mark and bring back “The Funk” to the music industry world-wide!

In an impressive career spanning more than four decades, Marlon L. McClain (also known as “The Magician”) has produced, arranged, performed on, or written songs for artists including Kenny G., En Vogue, Toni Braxton, George Clinton, George Benson, Ronnie Laws, Jeff Lorber, Swing Out Sister, Brandy, Maurice White, Tower of Power, and Joan Baez, resulting in his name having been associated with records that have sold a combined more than 50 million copies worldwide.

Getting his major break as the leader and guitarist for Portland, Oregon-based Pleasure, which was known for being a risk-taking, horn-driven band that often brought jazz overtones to its funk/soul foundation, McClain helped lead the band to a Top Ten Billboard R&B hit with “Glide,” Pleasure’s biggest hit.

In 1981, McClain released his first solo record, Changes, on Fantasy Records, and has since then released subsequent projects TBD (2010) and TBC (2014). His skills as a musician, producer and songwriter keep him in high demand. Marlon joined his formidable gifts with GapX The Band in 2016.