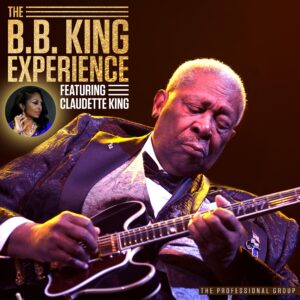 For over half a century, B.B. King and B.B. King’s Band defined the blues to the world, averaging over 250 sold out concerts per year, with classics like “The Thrill Is Gone,” “Rock Me Baby,” “Every Day I Have the Blues,” “How Blues Can You Get,” and “Why I Sing the Blues”.  Now BB King Blues Band members have gotten together to continue touring in the remembrance of “BB King”. These original members of “BB’S band Featuring “Claudette King” (The Daughter of BB King) are touring and performing all over the world.

Combining over 100 years of musical talent, this is your chance to experience and celebrate these incredible legends…LIVE ON STAGE!

Claudette King is the youngest daughter of blues superstar B.B. King.  Inheriting her father’s gift for music, Claudette sang in glee clubs and the choir of Reverend Brown’s Baptist church growing up in the San Francisco Bay Area.

Claudette King can be described as dynamic, amplified and downright sassy. She exudes a confidence that perhaps was born of her struggle to prove who she is and at the same time carve out her own identity.

As the daughter of the all-time Blues iconic legend, B.B. King, Claudette grew up attending church and had a “normal” everyday life which included attending public school and seemed far removed from the star-studded world of her father.

“My inspiration is my dad”, says Claudette, who was also mindful of how her father was constantly on the international concert circuit as the tireless Ambassador of the Blues. Listening to the radio and her mother’s collection of record albums, she soaked up the joyous singing of notables like Aretha Franklin, Chaka Khan, Michael Jackson, and Mahalia Jackson.

Claudette has performed and recorded with Tito Jackson, The BB King Band, George Benson, Kenny Neal, Michael Lee and many others

Take a look at the lineage of New Orleans culture and you’ll understand why Darrell Lavigne has been performing on stages all around the world. He was destined to become Take a part of the city’s rich jazz climate. Lavigne began his musical excursions at the age of ten first on guitar then trumpet. It wasn’t until his senior year when he finally

decided piano would be the instrument of choice. “I wanted to explore harmony and the colors of music and the piano represented that vehicle for me”. Piano was just one facet of Darrell’s study when along the way he became interested in how music was put together. He decided to major in composition at Xavier University of New Orleans and was under the guidance of composer Roger Dickerson. As a pianist, his influences came from the usual jazz sources such as Monk, Bud Powell, Ahmad Jamal, Hancock, Corea, Tyner and Jarrett. “My father was responsible for my appetite for jazz. “He used to put on Charlie Parker, Coltrane and Miles Davis records so that music was assimilated aurally. Early musical exposure in addition to the mentoring of Ellis Marsalis and Edward “Kidd” Jordan helped Darrell to be one of the most sought after pianist in town, performing with notable NOLA artists such as Charles Neville, Wanda Rouzan, Germaine Bazzle, Delfeayo Marsalis, and Columbia jazz artist, Kent Jordan, with whom he would record two albums, write for one (Night Aire) and produce another (Out Of This World). This led to collaborations with other Jordan family members such as Sir Edward “Kidd” Jordan and the Improvisational Arts Quintet, an avant-garde jazz ensemble featuring Jordan, drummer Alvin Fielder and the renowned NYC bassist,

William Parker. Darrell also recorded and toured internationally with former CBS Jazz recording artist Marlon Jordan. Some of the other names Lavigne has also performed with are: George Benson, Kermit Ruffins, James Andrews, Bonnie Raitt, Kirk Whalum, Willie Nelson, Gregory Porter, Elvin Bishop, Marion Meadows, Paul Taylor, George Duke, Hubert Laws, Ronnie Laws, Everette Harp, Dwight Sills, and Doc Powell, Kevin Mahogany, and Kevin and Robin Eubanks, and Bo Diddley. Darrell expanded his associations and contributions leading to performances with Bill Summers of Herbie Hancock’s Headhunters group, Hugh Masekela and Cynthia Dewberry in South Africa, and a gospel video, Come Walk With Me with Oleta Adams. In 2000, along with Trumpeter, Edward Anderson, he co-led and wrote for Bleu Orleans, a contemporary jazz/world music group releasing “Bleu Orleans”. Darrell was selected the best contemporary pianist in 2002 and jazz all-star, an award given annually by New Orleans Magazine. After Hurricane Katrina in 2005, “Bleu 2” was released, marking a new direction and compositional depth for Bleu Orleans. Darrell also performed on piano, wrote and conducted string arrangements on Stephanie and Marlon Jordan’s critically acclaimed release, You Don’t Know What Love Is. That same year, Lavigne also recorded on Donald Harrison’s Now’s The Time release featuring Grammy-award winning trumpeter, Chris Botti and producer Chuck Loeb. Though he is respected as a pianist/ keyboardist, he continues to produce and write for a number of artists. In 2009, he teamed with Ed Anderson for the scoring of the independent film, Trapped In Katrina, then composed music as Bleu Orleans for a critically acclaimed Off-Broadway play Brothers From the Bottom. Darrell was the touring musical director for former Yanni violinist Karen Briggs, and is a new member of the late B.B. King’s Blues Band featuring Tito Jackson, Claudette King and Michael Lee. He has been pianist in Oudist master Naseer Shamma’s Global Project Ensemble. Lavigne has been a faculty member of the Louis Armstrong Summer Jazz Camp since 2000 and has performed numerous international Jazz awareness and Arts in Education Workshops.

Eric Demmer Saxophone “Hear what you feel, play what you hear.” So began the journey of a natural-born musician, playing anywhere at any time with anyone. He grew up steeped in the blues and rock and roll of the 70’s and 80’s. He absorbed the sounds of The Rolling Stones, The Eagles, B.B. King, and fellow Texan, Stevie Ray Vaughn. One night, ERIC was invited to perform onstage with the legendary Clarence “Gatemouth” Brown. From that night forward, ERIC joined Gate’s band and traveled all over the world for the next 12 years, until Gate’s death in 2005. The journey with “Gate’s” band led them to tour extensively as the opening act for Eric Clapton during his “From The Cradle” tour. ERIC has performed with many well-known and respected musicians:

ERIC describes his style of music as, “high energy, funky blues with a mix of jazz” and combines a variety of influences while reminding everyone that, “The real thing comes from the heart and soul”.

The first steps of Jimmy Mack’s musical journey began in Northern California in the mid 1960s, where as a teenager Jimmy was hurled into the boiling cauldron of creativity that was the San Francisco psychedelic scene.

Jimmy, quickly became an accomplished bassist at the age of 17 and began jamming with many of the musical legends of the time, but found himself drawn more to the essential Americana roots of music, and by the early

In addition to shared stages with:

JONN DEL TORO RICHARDSON Guitar/Vocals
Jonn Del Toro Richardson got his start at an early age, having grown up in a musical family. His grandmother and her siblings played in a touring mariachi band playing regionally through the Southeast and Southwest. After watching his uncles play at family gatherings, he picked up a guitar in his early 20s. On a diet of Country, Motown, R&B, Classic rock and various other genres, Jonn continued learning his chosen instrument and he worked in various bands playing all types of music.

Once he heard the blues, he knew he had found his place. Richardson’s partnership with Diunna Greenleaf and his role in the Blue Mercy Blues Band and the support of the Blue Shoe Project in Dallas TX led them to the International Blues Challenge in Memphis TN in 2005.  That same competition Richardson was honored with the Albert King Award, the most promising blue guitarist of the competition.
In 2007 Jonn played on the Grammy winning album The Last of the Mississippi Delta Blues Men.  He continues Perkins’ legacy by working with the Pinetop Perkins Foundation. You can hear his influences on his various recordings and live. Richardson has had the pleasure to work with players such as Diunna Greenleaf, Otis Taylor, Bob Margolin, Hubert Sumlin, James Cotton, Bob Stroger, Willie “Big Eyes” Smith, Anson Funderburgh, Ronnie Earl, Rich Del Grosso,  and many, many more.
Jonn has released two CDs with other artists.  In 2011 Jonn released Time Slips on By with Rich DelGrosso to great reviews.  It garnered a Blues Blast Nomination for best Traditional Album and was named one of the top 100 blues CDs by Billboard Magazine  of 2011. In 2013 Jonn teamed up with Sean Carney to release Drivin’ Me Wild.   This album also got great reviews as served as the basis for several European tours.
In November 2015 Jonn released his first solo Album, Tengo Blues.  Produced by Answon Funderburgh this effort charted in the top 10 blues charts for months and garnered rave reviews throughout the country.  It also and earned him a Blues Blast Award nomination for best new artist in 2016.
In May 2017 Jonn won the Blues Music Award from The Blues Foundation for Best New Artist Debut Award for Tengo Blues!
Jonn Del Toro Richardson continues to tour extensively both in the U.S. and Europe.

From Houston Texas comes from a musical family with the help of my parents Rhonda Johnson and Barry Jackson. Brandon’s Father is a professional Bassist/Guitarist Brandon started early at the age of 3 listening to music and studying genres of music like Jazz, Hip-hop, Blues and many more. At the age of 13, He was performing professionally as a gospel drummer with Shawn McLemore and his gospel group New Image. He graduated from Spring High School and continued my music career. He has worked with Devon The Dude, Evelyn Rubio, Michael Lee from The Voice, Kenny Neal, and Tito Jackson and George Benson,  touring with the BB KING Experience Band Ft Claudette King.