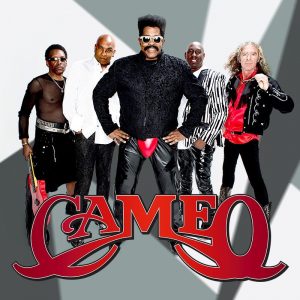 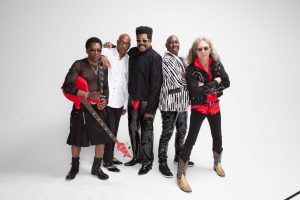 The music industry. While its style and paradigm will change, over time there are some things that will remain constant. Substance might not always outshine flash but it will surely outlast it. There those are rare instances however, when the two can combine to form something absolutely unique. CAMEO is a perfect example of one of those rare instances.

Founded, produced and led by drummer and Harlem native Larry Blackmon. CAMEO made its debut via the 1977 album “Cardiac Arrest”, This album included the hits, “We’re Going Out Tonight” and “Rigormortis”. Two more albums, “We All Know Who We Are” and”Ugly Ego” helped establish CAMEO with their core audience. However, it was their fourth LP, “Secret Omen”, including the hits “I Just Want To Be” and “Sparkle”, that began the groups journey to a whole new level of popularity and earned them their first of many gold and platinum albums to come.

Between 1980 and 1985 CAMEO released 7 LPs that spawned several Billboard Top Ten hits including: “Shake Your Pants”, “Feel Me”, “Keep It Hot”, “Your Love Takes Me Out”, “Freaky Dancing”, “Alligator Woman”, “Flirt”, “Heaven Only Knows” and more. In 1984, their album, “She’s Strange” shot to number 1 on the charts in both the United States and London bringing them both pop success and critical acclaim. 1985’s “Single Life” album continued the cycle of hits with the groundbreaking singles “Attack Me With Your Love” and “Single Life” which kept people moving on dance floors everywhere.

In 1986, CAMEO released the breakthrough album “Word Up” propelling them to worldwide superstar status. The “Word Up” Album was Grammy nominated for ALBUM of the YEAR.
The title song “Word Up”, went to Number # 1 on both the Pop and Black Music charts.
The 2nd single from that album, titled “Candy” also went to Number# 1 on the Black Music charts.
The 3rd single from the “Word Up”album,“Back & Forth”,peaked at Number # 3 on the Billboard charts.
(1987) The following year, CAMEO released the Blackmon-Produced LP “MACHISMO” (1987).

This album featured an all-star array of musicians including Maceo Parker, Fred Wesley, Bernard Wright, Randy Breckerand Michael Brecker. It also gave BLACKMON/CAMEO the opportunity to collaborate with the extraordinary Miles Davis, on the single “In the Night”. Their 2nd single from that album, “Skin I’m In” was praised both musically and as a social commentary which speaks to many issues that are still prevalent in society today. 1987 was also marked by CAMEO receiving the “American Music Award” for “Favorite Group” in the”Soul / R&B” Category.
CAMEO was the opening act for the first ever “Soul Train Music Awards” in 1987 taking home
2 awards that night in the process, for “Best Single / Group” and “Album Of The Year”.

Larry Blackmon is also one of the first recording artists to write, produce and direct “theme based” music
videos, utilizing the talents of accomplished actors like Debbie Morgan and Laurence Fishburne in the
process. The music of CAMEO has appeared in several motion pictures including;
“Two Can Play That Game”, “Friday After Next”, “Barb Wire”, The Best Man” and 2017’s release
of -“Kingsman The Golden Circle”.

In 2015, their Song “Candy” not only has its own dance, (“The Candy Dance”) it has become a staple
for families at gatherings and in 2015 it was named one of the “Top 5 Party Songs Of All Time” by
music DJs nationwide. Cameo’s song, “She’s Strange” inspired a viral sensation called “Hit Em With
The Shoulders” that even found celebrities like NBA Hall Of Famer Norm Nixon, dancer /
choreographer Debbie Allen and comedian / MTV host Lil Duval caught up in its infectious groove. In
addition to Snoop Dogg’s Release of – “Kill ‘ em Wit The Shoulders Featuring Lil Duval over the “She’s
Strange Track”

In 2016, BLACKMON continued his trailblazing ways by successfully securing a Residency for CAMEO in
Las Vegas. Cameo, is one of the first R&B / Funk /Soul acts to establish a residency in Las Vegas at
the Westgate Las Vegas Resort & Casino. Their show quickly became one of the hottest attractions in
Las Vegas seeing hundreds of fans and celebrities like Craig Robinson, Hannibal Burress, Denise
Williams, Paul Schaffer and even Flava Flav, all came through to enjoy the funky sounds of
Blackmon/Cameo

While many have attempted to duplicate Cameo’s sound and follow in their footsteps, it is safe to say
that CAMEO has been at the forefront of changing how the world thinks about and listens to music. Their
reputation for live performance has set one of the benchmarks that artists aspire to reach.
All of this speaks to the relevance, longevity and impact of CAMEO as a group & Blackmon as the
innovator. CAMEO has maintained their core funkiness for nearly four decades lead & directed by
BLACKMON and they are still standing as one of the most popular Funk / Soul bands of its era. In the
process, they have sold upwards of over 20 million records and to this day, CAMEO still tours, selling
out venues worldwide.