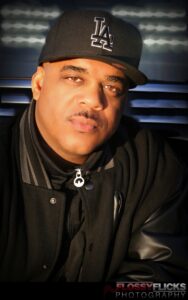 Born John B. Shaffer III (and sometimes identified as Candell Manson) (born June 25, 1968, Los Angeles, California, United States) known by his stage name Candyman, is an American rapper and record producer. He is best known for his hit single “Knockin’ Boots“. Candyman appears in the front row on N.W.A. and the Posse‘s 1987 album cover.

His next recording as solo artist was the 1988 12″ EP Hip Hop Addict which included the song “Knockin Boots” produced by Candyman and his late friend Johnny “J”.[2] Candyman then went on tour with Tone Lōc as his choreographer and back up dancer. While on tour Candyman’s single “Knockin’ Boots” landed on Bill Walker’s Thump Record’s, Lowrider Soundtrack Volume 1. The single  then gained airplay on Los Angeles radio stations KDAY and Power 106 .The airplay reignited the interest in “Knockin Boots” and Candyman was signed to Epic Records. Upon its release in the summer of 1990, “Knockin’ Boots” became a success and quickly made it to No. 9 on the Billboard Hot 100, spending 23 weeks on the chart. The song also reached the top of the rap chart and peaked at No. 5 on the R&B chart. “Knockin’ Boots” reached gold certification on October 12, 1990 for sales of over 500,000 copies, before reaching platinum status on December 18 of that year for sales of one million copies.[1][2]

The success of the single also led to Candyman’s “Ain’t No Shame in My Game” album, written by Candyman and produced by Candyman and Johnny J, to achieve RIAA gold status on the same day the single “Knockin Boots” reached RIAA platinum status.

In 2007, Candyman was featured in Nas‘s Where Are They Now (West Coast Remix), which also featured Kam, King Tee, Threat, Ice-T, Sir Mix-A-Lot, and the Conscious Daughters.

In 2012 Candyman wrote and created the syllabus and curriculum for the first ever 3 credited college rap, emceeing and DJ courses as well as taught the classes at Scottsdale Community College in Scottsdale, AZ from 2012 to present.

October 1st 2020 saw the debut of Candyman’s new single, “BLM? aka Don’t Shoot” produced by Ant Banks. On the YOUTUBE video for the new single, Candyman makes his directorial debut. The video shows the striking message of Black Lives Matter with positivity and unity across humanity.