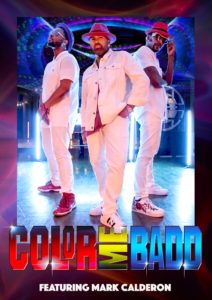 You know the name from the chart topping 90’s group Color Me Badd, but Mark Calderon has made a name for himself and gearing toward a new generation.

Formed in 1985, Mark Calderon of Color Me Badd, catapulted onto the Contemporary R&B scene with chart topping hits such as “I Wanna Sex You Up”, “I Adore Mi Amor”, and “All 4 Love”. The group saw valued success with “I Wanna Sex You Up” on the Billboard Top 100 hitting #2, remaining there for 4 weeks, and on the Billboard Dance Charts at #1. Their first album, “C.M.B”, in 1991 sold 6 million albums worldwide with both “I Adore Mi Amor” and “All 4 Love” hitting #1 on the Billboard Top 100. Winning an American Music Award, two Soul Train Awards and Grammy nomination, they saw themselves sitting among the greats on the charts. CMB toured with Paula Abdul, performed on some of the biggest stages, and also appeared on the hit TV show Beverly Hills 90210.

In 1998 the group made the decision to part ways, but their music and their commitment to the industry continued on throughout the years. After 12 years out of the spotlight, the group reemerged in 2010. In 2016, Mark Calderon of Color Me Badd appeared alongside 90’s artist such as Vanilla Ice, Salt N Pepa, TLC and Tone Loc for the “I Love The 90’s Tour”. It was during these experiences, it became apparent to Mark that it was time to take a leap of faith, follow his passions, and step out as a solo artist. He knew he needed to “give it a chance and see what comes back.” So in August of 2018 Mark solidified the decision and began working on his first solo single, “It’s Like Good Sex” with co-writers Todd Nystrom and Isaiah Pittman. While Mark has loved performing and being with CMB, he’s looking forward to the creative freedom that this solo venture is bringing. “It’s my time to explore, on my own terms, the freedom as an artist, a songwriter, and an entertainer. I’m so excited about this new journey.” Along with this new solo opportunity Mark will continue to pursue “Color Me Badd featuring Mark Calderon”. Even though an EP is not out of the question, Mark knows what he wants out of this endeavor. Mark will go with the flow of releasing a new single every 2-3 months with a possible dip into other genres of music. His next single “Summer Life” will be ready to drop in July of 2019. “It’s Like Good Sex” dropped on May 16, 2019 and for Mark this is just the beginning of a long awaited journey that he is finally ready to share with the world.