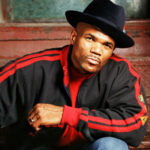 Innovator, Motivator, Philanthropist, Darryl “DMC” McDaniels changed music and made history when he broke down cultural barriers 30 years ago with his legendary band Run-DMC. Thirty-five million record sales later he continues to inspire & impact the world.

Darryl “DMC” McDaniels is a legendary music icon who first impacted the world over 30 years ago. From the first rap group to grace the cover of Rolling Stone Magazine to the first to appear on MTV, Grammy nominated Run-DMC changed music, culture, fashion, language and made American history. It would be hard to overstate his influence on popular culture.

Thirty-five million record sales later, and more than ten years after the untimely death of his bandmate Jam Master Jay, DMC still continues to create, inspire and motivate.  In 2009, as a member of Run-DMC, he was inducted into the Rock and Roll Hall of Fame and in 2016 he received a Grammy Lifetime Achievement Award from the Recording Academy given to “performers who, during their lifetimes, have made creative contributions of outstanding artistic significance to the field of recording.”

In 2014 he launched a comic book company called Darryl Makes Comics, a new journey that helps bridge the gap between the worlds of hip-hop and the fantastic adventures he got wrapped up in as a youth. The company’s first full length graphic novel hit stores in October 2014 and has since followed up with a new release annually.

Darryl is also the co-author of two critically acclaimed books: his recent memoir entitled, Ten Ways Not to Commit Suicide (2016/Harpers/Amistad), and a past autobiography King of Rock; Respect, Responsibility and My Life with Run-DMC (2001/ Thomas Dunne Books/St. Martins) as well as an award winning solo album Checks, Thugs & Rock and Roll.

That album produced the hit single “Just like Me” featuring Sarah McLachlan; a song DMC wrote after discovering he was adopted, that spoke to his new revelation and began his journey down another life path, in search of his birth mother. While his search struggle was captured in the 2007 Emmy Winning VH1 documentary DMC: My Adoption Journey, the process gave DMC tremendous insight and purpose, prompting him to become an advocate for adoption and children in foster care.

In 2006 he co-founded the Felix Organization with Sheila Jaffe- a nonprofit that works to provide inspiring opportunities and new experiences to enrich the lives of children who are growing in the foster care system.

When DMC is not in the studio recording he’s on the road with his rock band performing around the globe , including sold out shows in the UK, Hong Kong and Bahrain to name a few.

In between his work as a musical artist and producer, published author and speaker, or his work with his nonprofit, McDaniels has been invited around the globe to address various youth groups on respect, responsibility and self- awareness, including an invitation to the White House by President Obama.

Darryl has also appeared before Congress and various State legislatures in support of adoptees and foster children, worked with First Lady Michelle Obama on part of her Get Fit Campaign and was a featured speaker at the 2016 Kennedy Forum #Young Minds Matter event on Mental Health, and at the 2017 SXSW Music Festival to name a few.

He has received numerous awards including the Hard Rock’s Love All Serve All Award for his numerous philanthropic endeavors, Doing Art Together (DAT) Honoree for his contributions to helping under-served communities in NYC in the classroom and life, and the coveted CHILDREN’S RIGHTS Champion Award for his tireless work on behalf of foster children through his FELIX ORGANIZATION/ Adoptees for Children, as well as his work providing other year-round opportunities for children in foster care.

In addition to the Felix Organization, Darryl “DMC” McDaniels currently serves on the Board of Directors of The Garden of Dreams Foundation, a non-profit charity that works closely with all areas of The Madison Square Garden Company, including the Knicks, Rangers, Liberty, MSG Entertainment and MSG Media, to make dreams come true for children facing obstacles.