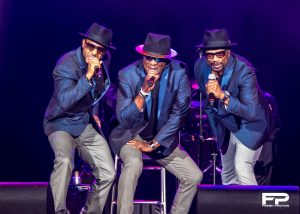 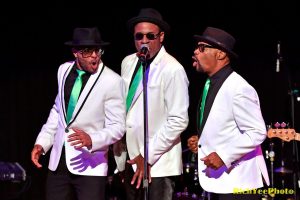 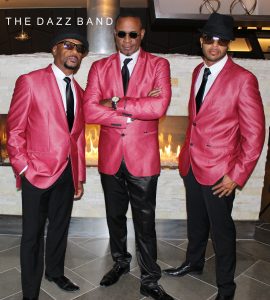 Bobby Harris, leader and founder of the Grammy Award Winning Dazz Band, formerly “Kinsman Dazz” was born in Cleveland, Ohio and started playing saxophone with his father in jazz clubs in when he was 16 years old.  Bobby played with many jazz greats including Roy Ayers, Freddie Hubbard and Richard “Groove” Holmes and grew up wanting to be a jazz musician.   In his mid 20’s after a Blood, Sweat and Tears performance he decided that  R &B, Pop and  Jazz fused together could be done with musical integrity.  The blend of musical genres combined with horn sections and riffs with a strong jazz connotation would be the key to success.    As a songwriter, Bobby Harris published countless song titles in his career which can be found on the two Kinsman Dazz albums and ALL fourteen Dazz Band albums including: Invitation to Love, Let the Music Play, Keep It Live, On the One For Fun, Jukebox, Hot Spot, Wild and Free, Time Traveler, Funkology, Here We Go Again, Rock the Room, Under The Streetlights, Motown Legends, and The 20th Century Millennium.  In 1982, The Dazz Band won a Grammy Award for Best Performance by a Group or Duo for “Let It Whip” written and produced by Reggie Andrews who also produced The Dazz Band hits including: “Swoop”, “Joystick”, “Heartbeat”, “Hot Spot”, “Party Right Here”, and “Let It All Blow”, their biggest UK single.  With a total of 20 hits on  Billboard’s R & B and Pop charts The Dazz Band performed on popular television shows such as Soul Train, Solid Gold and American Bandstand.   Hits like Let It Whip, Joystick, Heartbeat, Party Right Here, Swoop, Let It All Blow, Keep It Live, and others stood the test of time, and remain in recurring rotation while millions of fans continue to seek out Dazz Band music online and across the globe.

Skip Martin, lead vocalist and trumpet player, has been performing with The Dazz Band for a combined total of over 25 years.  Along with Harris, Skip Martin was also a part of the Grammy Award winning Dazz Band in 1982.  Skip’s vocals can be found on The Dazz Band hits  including “Let It Whip”,  “Swoop”, “Joystick” “Keep It Live” and on  The  Dazz Band’s classic ballads, like “Heartbeat”, ” Knock Knock”, “Invitation To Love”, and more!  Skips powerful tenor voice reflects a strong eclectic style.  Skip also spent 15 years as a lead vocalist for Kool and the Gang  and has performed with the Legendary Boys to Men, the Rockers and countless others.    Skips voice,  combined with masterful trumpet skills, and high level performance skills make him a musical force to be reckoned with.  Skip Martin is a MOBO Award recipient who achieved an honorary Doctorate in Music for his talents both vocally and through instrumentation.  Skip is a Platinum record recipient with Kool & the Gang, Platinum & Gold recipient with Dazz Band, R&B Song of the Year recipient, a Lifetime Achievement Award recipient from the African American Music Association, and has earned a Living Legend Award from the Black Music Academy.   Skip is constantly making music, creating, arranging, and  producing, and has 18 CD’s covering a variety of  musical genres ranging from  jazz to  jazz fusion,  r& b and neo soul.

Guitarist Marlon “The Magician” McClain joined The Dazz Band in 1984 and has been with the group for a combined total of  over 30 years.  Marlon’s writer, producer, arranger, and/or performance credits include: En Vogue, Toni Braxton, George Clinton, George Benson, Jeff Lorber, Kenny G, Dazz Band, Charlie Wilson, Christine and the Queens and more!  Marlon is a self-taught musician who began his professional music journey as guitarist and co-founder of Portland, Oregon’s Nationally known group Pleasure.    A masterful guitarist and producer, Marlon also enjoys developing new artists including his niece Whitney McClain, and his son Marlon ll aka “Brando”.

Award winning  Drummer, Producer and Songwriter Raymond Calhoun returned to the Dazz Band in 2019.  Raymond Calhoun was drummer on Dazz Band albums Here We Go Again and Time Traveler,  and was part of the United We Funk project organized by Harris and McClain.    A native of Washington DC,  Calhoun studied music at Howard University before getting  his first break with the Manhattans.   It was not long after that he was discovered by The Gap Band, where he would spend his next 33 years.  As a member of The Gap  Band Calhoun wrote one of the band’s signature songs “Outstanding” off their platinum selling album Gap Band IV.  “Outstanding” is one of the most sampled songs in hip-hop history,  and has been sampled by Snoop Dog, Madonna, Puff Daddy, Christina Aguilera and many more.  Calhoun’s additional writing credits include The Gap Band’s “All My Love”, “I Found My Baby” and more.   His touring and recording experience includes Patti LaBelle, Ice Cube , James Ingram, Yarbrough and Peoples  The Dazz Band and more.

In 2014, The Dazz Band was pleased to welcome accomplished vocalist Donny Sykes to the group.  Donny Sykes is a native of Los Angeles, California and has traveled the world performing in musical theatre and on television with legendary artists from Stevie Wonder to Tyler Perry.  Donny performed  with the renown Spirit Productions in “All Night Long” featuring the Motown hits, and “Man in the Mirror” featuring music of the legendary “King of Pop” Michael Jackson.  A lover of both old school and new school, Donny has  performed onstage with Beyonce, and is part of Kanye West’s Sunday Services.  When he is not on stage performing, Donny is teaching and inspiring children in Los Angeles, CA.

During the 1990’s The Dazz Band began performing internationally as Rap and Hip Hop emerged in the music market.  Audiences in Germany, France, London and Japan embraced the Funk and R & B sounds.  On the Major Hits record label Bobby Harris and Guitarist Marlon McClain organized the project entitled “United We Funk All Stars” which featured artists including: The Dazz Band, Charlie Wilson of The Gap Band, The Bar Kays, Confunkshun, The SOS Band, Roger Troutman and Zapp.  The “United We Funk All Stars” success is credited with rejuvenating the careers of many Funk artists of the 1980’s.  Today, the popularity of new music includes a resurgence of these familiar funk sounds.

The Dazz Band has performed throughout the 2000’s with legendary artists such as:  George Clinton, Confunkshun, Brick, The SOS Band, Zapp, The Mary Jane Girls, Whodini, Digital Underground, Tom Brown, Ronnie Laws, Nu Shooz, Cameo, Morris Day and The Time, Midnight Star, Rose Royce, The Original Lakeside, Brick,  Klymaxx, Vanilla Ice, Dennis DeYoung of Styx and many more.  The Dazz Band was recognized by the United States military for traveling  to Kuwait & Iraq on 3 separate occasions to perform for United States troops; and helped raise over 30k for the Susan B. Komen Foundation for breast cancer research at a performance in Cleveland.  The Dazz Band is enjoying getting audiences are up on their feet with their new jam “Drop It” and touching hearts everywhere with their new ballad “Your Luv” in 2019.