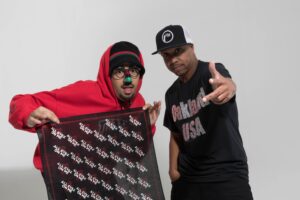 Digital Underground is a Grammy nominated multi-platinum American hip hop
group. This Legendary act is best known for their hit’s The Humpty Dance, Same
Song, Freaks Of The Industry, Kiss U back, Doowutchyalike, and I Get Around
with 2 Pac. The group is noted for introducing Tupac Shakur to the music /
entertainment industry in 1991. Digital Underground is widely recognized for it’s
unique contributions to hip hop music, as well as possessing one of the best live
performances the genre has to offer.
Money B, a co-founder of the group is noted as having one of the most
recognizable voices in hip-hop. He has collaborated and helped sell hundreds of
millions of records with the likes of Tupac, Bone Thugs N Harmony, Raw Fusion,
Ne-Yo, Ice Cube, George Clinton, The Luniz, Public Enemy, and more! Chris
Clarke aka Young Hump is the protégé of Shock G and the newest member of
Digital Underground. In the Tupac Shakur biopic “All Eyez On Me” Money B
plays himself and Chris Clarke plays the role of Shock G/Humpty Hump.
Collectively they represent Digital Underground in the film. Musically they have
formed to become the official touring and recording representation of Digital
Underground.