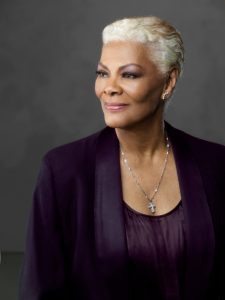 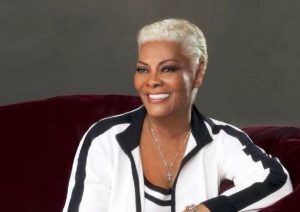 Scintillating, soothing and sensual best describe the familiar and legendary voice of five-time Grammy Award winning music legend, DIONNE WARWICK, who has become a cornerstone of American pop music and culture.  Warwick’s career, which currently celebrates 50 years, has established her as an international music icon and concert act.  She has earned more than sixty charted hit songs and sold over 100 million records.  She began singing professionally in 1961 after being discovered by a young songwriting team, Burt Bacharach and Hal David.  She had her first hit n 1962 with “Don’t Make Me Over.”  Less than a decade later, she had released more than 18 consecutive Top 100 singles, including her classic Bacharach/David recordings, “Walk on By,” “Anyone Who Had a Heart,” “Message to Michael,””Promises Promises,” “A House is Not a Home,” “Alfie,” “Say a Little Prayer,” and the theme from “Valley of the Dolls.”

Warwick received her first Grammy Award in 1968 for her mega-hit, “Do You Know the Way to San Jose?” and a second Grammy in 1970 for the best-selling album, “I’ll Never Fall in Love Again.” In 1974, she hit the top of the charts with “Then Came You,” a million-selling duet with The Spinners.  In 1976, Arista Records label-mate Barry Manilow produced her first Platinum-selling album, “Dionne,” which included back-to-back hits “I’ll Never Love This Way Again,” and “Déjà vu.” Both recordings earned Grammy Awards, making Warwick the first female artist to win the Best Female Pop and Best Female R&B Performance Awards.

Warwick’s 1982 album, “Heartbreaker,” co-produced by Barry Gibb and the Bee Gees, became an international chart-topper.  In 1985, she reunited with composer Burt Bacharach and longtime friends Gladys Knight, Elton John and Stevie Wonder to record the landmark song “That’s What Friends Are For,” which became a number one hit record around the world and the first recording dedicated to raising awareness and major funds for the AIDS cause, which Warwick continues to support.

Throughout the 1980’s and 1990’s, Warwick collaborated with many of her musical peers, including Johnny Mathis, Smokey Robinson, Luther Vandross, Jeffrey Osbourne, Kashif and Stevie Wonder.  Warwick was also host of the hit television music show, “Solid Gold.”  In addition, she recorded several theme songs, including “Champagne Wishes & Caviar Dreams,” for the popular television series “Lifestyles of the Rich & Famous,” and “The Love Boat,” for the hit series from Aaron Spelling.  Most recently, she recorded an album of duets, “My Friends & Me,” for Concord Records and a much anticipated Gospel album, “Why We Sing,” for Rhino/Warner Records.  This year, she will release a special album celebrating the music of legendary composer Sammy Cahn.

More recently, Warwick has added “author” to her list of credits with two best-selling children’s books, “Say A Little Prayer,” and “Little Man,” and her first autobiography, “My Life As I See It” for Simon & Schuster.

Always one to give back, Warwick has supported and campaigned for many causes and charities close to her heart, including AIDS, The Starlight Foundation, children’s hospitals, world hunger, disaster relief and music education for which she has been recognized and honored and has raised millions of dollars. A New Jersey school was named in her honor, The Dionne Warwick Institute in recognition of her accomplishments and support of education.

Celebrating 50 years in entertainment, and the 25th Anniversary of “That’s What Friends Are For,” Warwick hosted and headlined an all-star benefit concert for World Hunger Day in London, was honored by the Desert Aids Project with its prestigious 2011 Steve Chase Humanitarian Arts & Activism Award, was recognized by AMFAR in a special reunion performance, alongside Elton John, Gladys Knight and Stevie Wonder at its Anniversary Gala in New York City, and was honored by Clive Davis at his legendary Pre-Grammy Party Gala.