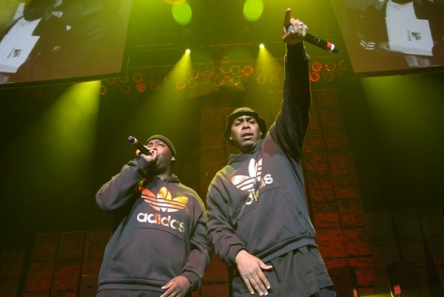 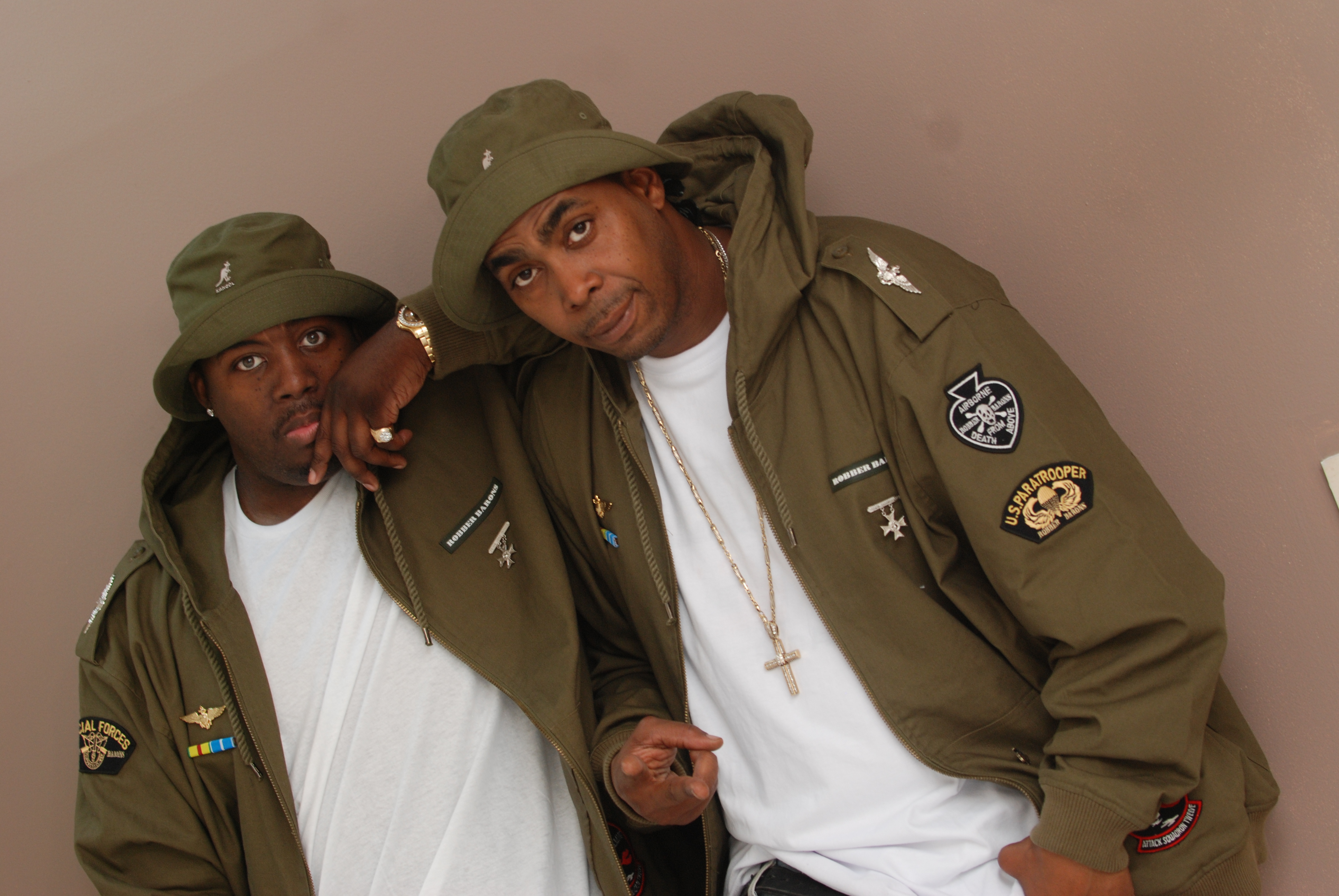 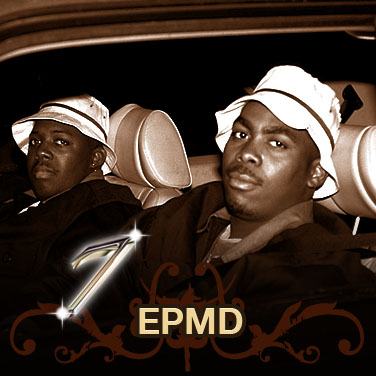 They are rap’s first great duo, one that excelled as rappers and producers. They are among the most-sampled rap acts of all time, their tunes having been mined by Jay-Z, DMX, 2Pac and Tha Alkaholiks, among many others. They introduced funk-styled production to rap, paving the way for Dr. Dre’s The Chronic. And even though their own rap skill was immense, they are also the best talent scouts in rap history, introducing the likes of Redman, Das EFX and Keith Murray. Then they broke up and reunited to rave reviews. The group is EPMD, undisputed legends in the rap game.

The Long Island, New York pair’s first five albums went gold — 1988’s Strictly Business, 1989’s Unfinished Business, 1990’s Business As Usual, 1992’s Business Never Personal, 1997’s Back In Business — thanks to Erick Sermon and Parish Smith’s tag-team rap style and groundbreaking production. Now, after more than 20 years in the game, EPMD returns with WE MEAN BUSINESS, their first album on their own EP Records and their seventh overall. The new collection is a testament to their Business plan.

“All of our albums have Business in the title,” Smith explains. “Now that we’re in a new era and the game is changed, we realize that it’s different from when we handed in a CD to our first label to being at Def Jam. Erick and I created our own vehicle to be able to drop this album. That’s how we came with the title We Mean Business, because we do.”

EPMD updates its classic sound and sentiment on “Listen Up,” a funk-drenched song complete with a talk box. Recognizing EPMD’s status as pioneers, Sermon acknowledges how important his lyrics are: “Can’t talk ignorant/I got some intelligent folks that’s digging it.”

Those same folks will be digging We Mean Business song “Roc Da Spot,” a throwback of sorts to “You Gots To Chill,” one of 1988’s most acclaimed rap singles. “The beat had that EPMD sound, as far as the claps,” Sermon says. “It had a familiarity to it because of the sound and, 20 years later, we’ve still got that funk coming.”

Indeed, EPMD shows its music is as potent as ever on the latest installment of their infamous “Jane” series and on the confrontational “Run It,” which features fellow rap pioneer KRS-One. Even though EPMD hoped KRS-One would appear on one We Mean Business song, KRS-One was so impressed with EPMD’s output that he responded saying that he wanted to be on both songs.

As pillars of rap’s foundation, EPMD was eager to work with another legend in order to deliver the type of hard-hitting rap music they came of age producing. “It seems to be that everybody is crying about the state of our hip-hop, but no one’s doing the work,” Smith says. “It’s like everybody stopped working. Now that we’re working again, it’s coming back full circle to the beginning. With that being the case, KRS was always one of the ones that was there, and he’s No. 1 on the list of lyricists and MCs.”

Given their own status — Raekwon once famously told the RZA that the Wu-Tang Clan should be like a second coming of EPMD’s Hit Squad — EPMD reached out to Raekwon for “Puttin’ Work In” in order to connect the dots between the two iconic rhyme families. “The Hit Squad was a big influence on what the Wu-Tang were doing,” Sermon says. “They were a crew of MCs, just like we were a crew of MCs. Plus, it’s fun to hear somebody that you like on your stuff.”

Unfortunately, life isn’t all good. So, EPMD turns an introspective eye to life on the reflective “Bac-Stabbers.” Here, Sermon and Smith detail how jealousy can derail relationships and how loyalty often evaporates when times are tough. It’s an eye-opening musical moment, one that is in line with other noteworthy EPMD singles.

“That’s classic EPMD, like when you think about ‘Crossover’ or ‘Gold Digger,’” Sermon explains. “Parish addressed the breakup in there, those that are trying to hate on us. We’re past that, but people still want to hate. Parish wrote his part first, and he killed it.”

EPMD has been killing it since it dropped its “It’s My Thing” b/w “You’re A Customer” 12’’ single in 1987. Short for “Erick and Parish Making Dollars,” the Long Island duo made an immediate impact on the rap scene, even though one of its trademark characteristics was born out of necessity. Given Sermon’s lisp, he had to modify his rhyme style into a controlled, slow flow. Smith employed a similar style, and the pair’s commanding, assured vocals and innovative, mid-tempo production made them stand out in a rap field populated with high-energy vocalists and frenzied beats.

Another EPMD quality made them even more formidable. Sermon and Smith were a self-contained unit, rappers and producers who could conceive, create and produce their own material. Their creative brilliance was evident throughout Strictly Business, one of the most universally acclaimed albums in rap history.

Yet despite being from New York, when EPMD first arrived many fans couldn’t determine where the group was from. The funk vibe of “You Gots To Chill” further complicated matters, as it sounded like nothing coming from New York rappers at the time. “When we came with ‘You Gots To Chill,’ so many people were used to the way the East Coast music sounded,” Smith says. “But when we came out with a West Coast sound, it bugged them out once they figured out that EPMD was from New York.”

EPMD’s futuristic funk sound was a sonic predecessor to Dr. Dre The Chronic, among other classic recordings. But as EPMD returns, the group is adamant that they remain in their own lane, especially since they have their own clothing and shoe lines. “Parish and I are not in competition with nobody,” Sermon says. “We’re not in comp with what’s going on. We’re not trying to be on the countdown with these artists. It’s a bigger picture than just that. We’ve been touring for the last two or three years, and the same sold out show that T.I. has, we have it. We’re here to make music for the heads.”

“It’s very important for us to stay us,” Smith adds. “People want to hear and see EPMD.”
That’s because We Mean Business isn’t just an album title for EPMD. It’s a mindstate.