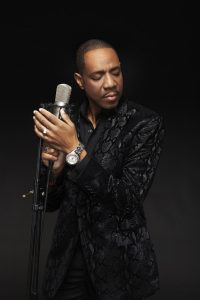 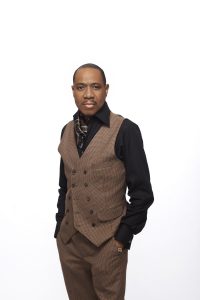 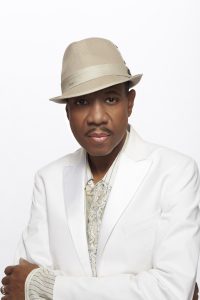 For urban contemporary listeners and music critics alike; there is no doubt which R&B artists deserve a place among the greatest of all time. Freddie Jackson mastered the art of chart domination during the mid to late 80’s, and today continues proving his distinction as one of the Top 50 Greatest R&B Singers (Billboard 2017). The proof is in the phenomena: a Billboard chart resume that boasts 18 songs in the Top 10 with 10 songs rocketing to #1, a 3x Grammy Nominee, and an American Music Award winner. The Harlem native’s star first appeared on the horizon in 1985, after releasing his debut album, Rock Me Tonight (Capitol Records). Before that, life appeared ordinary enough behind the scenes with a word processing job, train rides to do session work, and backup singing gigs throughout New York nightclubs. Despite a brief stint at the start of the 80’s on the west coast, as lead with the R&B band Mystic Merlin, it was back on native soil that Jackson would launch his career. Once again, his gospel-bred musical connections would play a key role in his destiny. Even while singing backup for Melba Moore, it was fellow church member and friend Paul Laurence at Hush Productions, who joined to shape Jackson’s own turn at center stage. As a talented record producer and songwriter, Laurence realized enough was enough and pulled Jackson from behind both a typewriter and other acts; penning him a hit with the title track for what would become Jackson’s debut album—“Rock me Tonight”. Even after shooting to #1 and sitting there for six weeks, Jackson wasn’t done hitting the charts. He quickly won urban contemporary radio’s heart with, “You Are My Lady”—a second straight R&B topper that became his highest ranked single on the Pop charts—hitting # 13. He quickly followed up with, “He’ll Never Love You (Like I Do)” and “Love Is Just a Touch Away”, while sending them both straight to R&B Top Ten. The debut LP reigned over the R&B album charts, going platinum. His phenomena persisted after a duet with Melba Moore, “A Little Bit More” shot to #1 R&B, and he backed it with yet another platinum-smash aptly titled, Just Like the First Time, in 1986. This is when Jackson appeared musically magical with the success of the album’s singles, charting: “Tasty Love”, “Have You Ever Loved Somebody”, and the soother, “Jam Tonight”—all hitting #1 as if he planned it. Even, “I Don’t Want to Lose Your Love” went to #2.

During the tail end of the 80’s, on into the 90’s, what appeared to be a slowing of Jackson’s hits on the charts, was actually a shift in his music’s placement—a word Jackson says is the key to not just performance but life. Radio listeners still got albums such as the 1988, Don’t Let Love Slip Away—which introduced hits of the singles, “Hey Lover”, “Nice and Slow”, and “Crazy (For Me)”. By 1990, Jackson’s, Do Me Again, an album with the hit track, “Main Course”, topped at #2. He released 1992’s, Time for Love, with the soul remake, “Me and Mrs. Jones” (later a soundtrack addition). By the time he signed with RCA/BMG Records in 1993, he was making worldwide appearances at a record pace. He even gave fans a Christmas album, before leaving to record Private Party with Scotti Brothers Records in 1995. There, the next album’s single, “Rub Up Against You” rose to the Top #25 R&B. While critics questioned the change of chart-topping agenda, fans saw, as much as heard, the hit maker in film and on TV in tandem with his radio releases. From the start, the pattern of simultaneous media and music appeared, such as with the syndicated special, “The 1985 R&B Countdown”, hosted by Whitney Houston to the following year playing himself and singing, “He’ll Never Love You (Like I Do)” on the daytime drama, “One Life to Live”—Jackson was a constant presence. By 1988, he joined other world-renowned legends in celebrating Freedomfest: Nelson Mandela’s 70th Birthday Celebration. This kicked off a subplot to his life story—that of a popular singer pulled at a superhuman pace between the stage and the big and small screens. When cross-referencing his music with the movies and TV, one clearly sees Jackson stayed in heavy demand. Once he seized the era and the airwaves with a number of hits, even film and TV audiences couldn’t get enough. Not limited to recording ballads aimed at adults; over 30 motion picture and television soundtracks—such as kid’s favorite, All Dogs Go to Heaven—feature his acclaimed vocals as well. Not content with his music alone, producers and directors spent the next decade tucking Jackson into scenes with his hits—from popular sitcoms like Family Matters, and The Golden Girls, to feature films. After appearing with his song, “All Over You” in the low budget horror film, Def by Temptation in 1990, he went from light camp to serious cinema with King of New York (his song “Dream On” included) alongside heavy-hitters like Wesley Snipes, Laurence Fishburne, and Christopher Walken.

In 2000, he eased into the new millennium still grooving up broadcasts as he performed his classic, “Rock Me Tonight” on Love & Basketball. By the following year, The Jazz Channel Presents Freddie Jackson aired, highlighting his greatest hits over the decades. Despite all the cinematic adulation, he felt an even greater need to stand by his music recording—despite the changing tides in R&B over the years. When Hip-hop’s popularity began to shoulder in on the genre’s position, a few artists like Jackson wisely rolled with the new trends—even throughout his seemingly silent, post #1 hit domination era. While a few of his industry peers began crossing over to Pop charts, he took the change from a different approach by blending his vocal prowess with various newly emerging R&B and even Hip-hop talents. From the 1991 EPMD/Tracie Spencer tracks, “Love Me Down” and “Main Course” to Mikki Howard/Da Youngsta’s 1992 releases, “I Could Use A Little Love (Right Now)” and “Can I Touch You”, as well as the 1995 Brownstone/Kut Klose jams, “Come Home II Us” and “Rub Up Against You”.

Having made numerous rounds of major TV shows—from Top of the Pops, Oprah, to the Soul Train Awards, and even writer/performer on The Tom Joyner Sky Show; with several hit videos of his own—he is at once familiar to fans. His music is kept current over three decades even via the digital age, such as his hit, “Have You Ever Loved Somebody” being placed in the video game, Grand Theft Auto IV, in 2008. Eventually, like many major artists in the Internet dominant age, Jackson created independently produced projects, gaining more control over both his life and his career—while still charting songs in the Top 100’s including, Life After 30 (#81 R&B, 1999), It’s Your Move (#45 R&B, 2004), and Transitions (#26 R&B, 2006). By 2010, he released the single, “I Don’t Wanna Go”, from the Barry Eastmond produced, For You, an album off the Entertainment One Music label. In 2012, the TV series Unsung featured The Life of Freddie Jackson, who in turn gave a new audience of fans yet another single two years later with Climax Entertainment entitled, “Love & Satisfaction”. His current release—Love Signals—offers longtime fans and new listeners alike just that—a melodic offering of love in a multitude of styles. From the orchestral openings to the instrumental driven collaborations with master musician Gerald Albright on “Hold Me Tonight”—each song is a pulse of passion and light. “All I Wanna Do” will surely become the new anniversary anthem, while his most global track to date, “Save The Babies” asks this tumultuous era’s most pertinent question: ‘Who is going to save the child?’

Coming from a master crooner, Love Signals aims to be a beacon sent out by one of R&B’s brightest and ever-evolving stars—proving fabulous Freddie Jackson is still fresh enough for today.