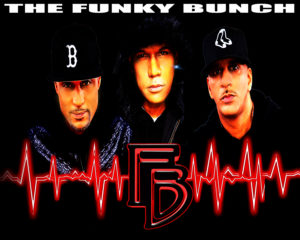 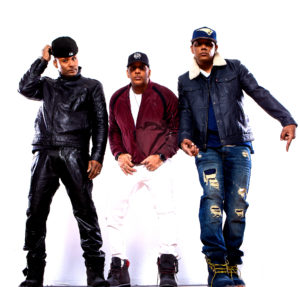 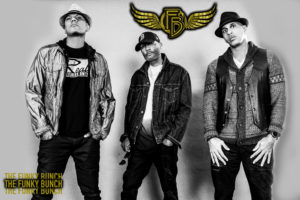 The Funky Bunch is an early-90’s American hip-hop musical group, consisting of Mark Wahlberg (aka Marky Mark), Scott Ross (aka Scottie Gee), Hector Barros (aka Hector the Booty Inspector), Terry Yancey (aka DJ-T), and Anthony Thomas (aka Ashey Ace).
The group released their debut album, Music for the People, on July 23, 1991 and was met with instant critical acclaim, fueled by two certified gold, top-10 singles, “Good Vibrations” and “Wildside.” “Good Vibrations” dominated radio waves in 1991 and went to No. 1 on the Billboard Hot 100, while “Wildside” went to No. 10.

Following the release of the album, The Funky Bunch joined the New Kids on the Block’s “The Magic Summer Tour” across Europe in the fall of 1991. While on tour, they learned Music for the People had gone gold on November 15, 1991 before being certified platinum on January 14, 1992.

Fresh off performing in Europe, The Funky Bunch launched the “Music for the People Tour” in the United States in January, 1992, which pushed their album all the way up to No. 1 on the Top Heatseekers chart and to No. 21 on the Billboard 200.
Their second album, You Gotta Believe, was quickly recorded and released on the heels of Music for the People’s success on September 15, 1992. You Gotta Believe rose to No. 67 on the Billboard 200 and the album’s lone single, also titled “You GottaBelieve” rose to No. 49 on the Billboard Hot 100.

Over the years The Funky Bunch remained in contact, and in early 2019 was given the opportunity to perform on some tour dates with Hammers House Party. This was the moment they realized that the time was finally right to get back together after trying in the past.
July 2019 The Funky Bunch released their first single “Absolutely” ft. Sisqo. They soon after began work on their documentary and book which are all set to come out in 2020 along with a new single “Celebrate”

The Funky Bunch and the group loves hearing from and connecting with their fans, who they still consider part of a huge family.
Stay tuned….more to come!!!!
FAMILY | FRIENDS | FANS | FUNKY BUNCH | #1LOVE