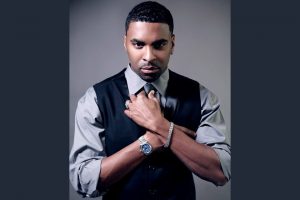 They say that “if it ain’t broke, then don’t fix it.”  Yet, according to the best-selling R&B ground breaker Ginuwine, there’s a corollary to that time honored adage: namely, just because it ain’t broke don’t mean you can sit around and rest on your laurels.  If you’re an artist, you’ve got to push yourself.  Mature.  Expand your creative horizons.  And make sure your fifth album is at least as memorable and important as your first — and give it all the show-stopping soul power you’ve got.

Back II Da Basics, Ginuwine’s fifth Epic Records/Sony Urban Music CD, is fueled by the expansive artistry and vitality that Ginuwine’s fans have come to expect while the man’s new music raises the bar on his already high standards.  Featuring production by Jazze Pha (Ciara/Monica), Troy Oliver (2001’s “Differences”), The Underdogs and TrackMasters, the album is chockfull of songs that make you wanna hit the club and the sheets. Back II Da Basics is the sound of Ginuwine reconnecting, reaffirming and reigniting the passion that makes his music so real, memorable and, well, genuine.

If you ask the affable soul star if his follow-up to 2003’s platinum-certified The Senior (which spawned the smash hit “In Those Jeans”) is a reintroduction of sorts, Ginuwine responds, “Somewhat. Even though I’ve enjoyed a long run and am celebrating ten years in the industry, it never hurts to come on like it’s the first time someone has heard you.”  With a devilish laugh, he adds, “I think I’ve made a big enough statement as an artist.”  That he certainly has and continues to do on an LP whose title says it all. “On The Senior, the theme was that I was in high school situation and now, I’m in college, which means that it’s good to brush up on the fundamentals, which is what I did. I made sure I had plenty of dance songs because dance music is part of my roots.  But I also made sure I didn’t forget those ballads, because that’s also something I love doing. So I’m just going back to the basics of who I am, but I’m doing it in a new way.”

Ginuwine is referring to the contributions from producers outside of his usual comfort zone, an experience he declares was “exciting and also a challenge, because it’s not the way I usually work. I’m used to doing almost everything in-house, but working with new people was a learning experience. I’m willing to be as humble as I was when I first started out, and that’s why I was into exploring all possible avenues.”

A taste of that expansiveness is evident on the album’s first single, the sultry slow-burning “When We Make Love.”  Produced by new jack Ced Solo, “When We Make Love” is classic Ginuwine honed to a 2005 sheen.  As for the steamy lovers’ vibe?  Ever the ladies’ man, Ginuwine laughs, “I think it’s pretty much self-explanatory. That sort of romantic, sensual feeling has pretty much been my strength and I know how to express that emotion well.”

Which is proved by the song “Better Half.”  Produced by Timbaland associate Danger Handz, this ballad mines a similar spirit to 2001’s “Differences,” which was one of the most played songs on urban R&B radio.  “I think `Better Half’ is going to be another one of those songs that people use as part of their wedding ceremonies,” Ginuwine predicts, “because the subject matter is so universal.”  Another smoothed out soul turn is “I’m In Love” (produced by Troy Oliver) which Ginuwine describes as “the type of song that I really feel good about.”

Yet, if you think that Back II Da Basics is only a collection of love songs, there are other dimensions to Ginuwine’s musical world.  Eager to kick-start his dancing machine, Ginuwine aka “The Pride of Washington D.C.,” unleashes the club banger “In The Club,” featuring red hot Jadakiss, and lets Jazze Pha work his magic on the old school Michael Jackson flavored jam “Want You To Be.”  From late night creeps to crunked out joints, Back II Da Basics is Ginuwine in totality.  “I think people know how I get down and that’s why I always try to give so much of myself on each album.”

Born in Washington, D.C., Ginuwine fell under the spells of Prince and Michael Jackson as a child.  By the time he was 12, the aspiring musician had started performing with a local hip-hop group, the Finesse Five.  As time went on, he sang with another D.C. group, Physical Wonder, and even entertained folks as a nimble MJ imitator.  In 1996, Ginuwine was discovered by Jodeci and, after traveling to New York City, met Timbaland, a then up-and-coming producer.  Together they cut the edgy track “Pony,” which lead to a deal with Sony Music.

His debut CD, Ginuwine…The Bachelor hit the streets in late ’96 and “Pony” quickly became a #1 R&B and #6 pop chart/radio sensation.  The LP would go on to double-platinum status, driven by popular cuts like “Pony,” “Tell Me Do U Wanna,” “I’ll Do Anything/I’m Sorry,” “Holler” and “Only When Ur Lonely”.  With his stylized dancing and creamy vocals, Ginuwine emerged as one of contemporary R&B’s biggest rookies and also a major sex symbol.  In 1998, he released “Same Ol’ G” (from the Dr. Dolittle soundtrack), which resulted in yet another chart hit.

In 1999, Ginuwine proved that lightning sometimes strikes twice with his second double-platinum LP, 100% Ginuwine, which entered the pop charts at #5.  The first single “So Anxious,” became a massive crossover hit, while “What’s So Different?” and “None of Ur Friend’s Business” scored on the R&B charts.  In 2001, Ginuwine dropped The Life, which, as he’d done previously, entered the charts in the Top 5 and went platinum-plus (to date, all four Ginuwine albums have achieved that prestigious mark).  The set’s second single, “Differences,” triumphed as Ginuwine’s biggest pop hit yet, hitting #4 on the Hot 100.  The following year, “G” displayed his versatility by making his feature film debut in the 2002 comedy “Juwanna Man.” Over the past several years, he’s also appeared in other TV and film projects, including “Half & Half” and “Honey.”  “I love acting! I love doing sitcoms; that’s something I really want to do more of,” exclaims the multi-faceted R&B superstar. With 2003 came the release of The Senior, which resulted in another R&B chart/radio hit (“In Those Jeans”), another platinum certification and a sold-out Ladies Night Tour (also featuring Brian McKnight, Joe and label mates Jagged Edge).

With ten years in the game, Ginuwine is as hungry as ever, yet grateful for what he’s accomplished.  “My career has been a blessing,” he says.  “I know that some folks thought that after ‘Pony’ I was just a novelty and they wrote me off, but I am living proof that you can do it.”

And, what can Ginuwine fans expect this time around?  “Back II Da Basics has those true heartfelt songs, amplified by a new creative experience,” admits the artist. “I’m happy with this record and I know that my fans will come away with a greater sense of who I am and what I’ve been though. The one thing that will never change is that I will always express myself through my music.”