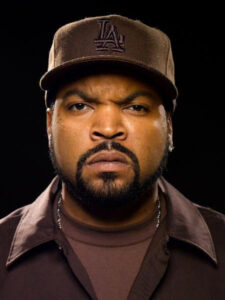 Ice Cube is one of the most crucial artists in rap history. A razor-sharp lyricist, alternately furious and humorous MC, and accomplished producer, Cube laid the foundation for the legacy of pioneering gangsta rap group N.W.A by writing “Boyz-N-the-Hood” for partner Eazy-E and making his first big splash as an MC with the subsequent “Dope Man.” After N.W.A‘s Straight Outta Compton (1988) infiltrated suburban America and attracted the scrutiny of the FBI with “Fuck tha Police,” Ice Cube launched a solo career that has entailed five platinum albums and one platinum EP, including AmeriKKKa’s Most Wanted (1990), Death Certificate (1991), and The Predator (1992). A month before Cube released the first LP in that series, he appeared on Public Enemy‘s critical “Burn Hollywood Burn” and within a year aided in the disruption of the track’s target with a co-starring role in John Singleton‘s Boyz N the Hood. While Cube added to his filmography with projects such as the Friday franchise, directorial debut The Players Club, and Barbershop, he devoted less time to music. He continued to record occasionally as a solo artist and member of Westside Connection, and extended a streak of RIAA-certified releases that lasted through Laugh Now, Cry Later (2006). The next decade, Cube and Dr. Dre co-produced the acclaimed Straight Outta Compton (2015), a biographical film about N.W.A, whose resurgence culminated with an induction into the Rock and Roll Hall of Fame. Cube soon returned with his first solo album in eight years, Everythangs Corrupt (2018).

Raised in South Central Los Angeles, California by working class parents, Ice Cube, born O’Shea Jackson, became involved with b-boy culture in his early teens and in high school began writing rhymes. Cube rapped at parties hosted by Dr. Dre, who soon produced his first recordings: Stereo Crew’s “She’s a Skag,” released on major-label Epic in 1986, and an EP by C.I.A., issued in 1987 on the small independent Kru-Cut. Stereo Crew and C.I.A. also featured K-Dee, while the latter added Sir Jinx. Along the line, Cube met Eazy-E through Dre, and that trio, along with Arabian Prince, formed the first lineup of N.W.A., bolstered soon thereafter by MC Ren and DJ Yella. Eazy and music industry veteran Jerry Heller set up Ruthless Records, launched later in 1987 with a pair of 12″ releases: Eazy‘s “Boyz-N-the-Hood,” and an EP from N.W.A. containing “8 Ball” and “Dope Man.” Cube was the MC only on “Dope Man,” but he was credited as sole lyricist on the three tracks, all of which demonstrated the writer’s flair for pointed narratives illustrated with irreverent humor.

By the time the Macola label expanded the Ruthless tracks for the compilation N.W.A. and the Posse, Cube had headed to Arizona to study architectural drafting at Phoenix Institute of Technology. After he obtained a one-year degree, he returned to work on N.W.A‘s Straight Outta Compton and Eazy-E‘s Eazy-Duz-It. Released by Ruthless in August and September, respectively, 1988, the albums gradually crept into the mainstream, thanks in significant part to word of mouth and eventual support from Yo! MTV Raps. Nine months after its release, Straight Outta Compton peaked at number nine on Billboard’s R&B/hip-hop chart (trumping Eazy-Duz-It, which in March topped out at number 12). The extreme lyrical content of “Fuck Tha Police,” courtesy of Cube and MC Ren, attracted scrutiny from the Los Angeles Police Department and eventually the assistant director of the FBI office of public affairs, who sent the group a strongly worded letter.

Deep conflicts with Jerry Heller prompted Cube to leave N.W.A in late 1989. He went to New York with fellow producer Sir Jinx and recorded his first solo album, heralded by an appearance on Public Enemy‘s “Burn Hollywood Burn,” with the Bomb Squad. Released on Priority in May 1990, AmeriKKKa’s Most Wanted was an instant Top 20 Billboard 200 hit and went gold within four months. While the album’s production and Cube‘s mike skills were praised, the often violent, homophobic, and misogynist lyrics were criticized, particularly by the rock press and moral watchdogs. Even amid such controversy, the album was hailed as a groundbreaking classic — led by the title track, a number one hit on Billboard’s Hot Rap Singles chart — and established Cube as a recognized individual force. He began his own corporation, which was run by a woman, and by the end of 1990 co-produced a 12″ for Yo-Yo and released the platinum Kill at Will EP. Yo-Yo‘s Make Way for the Motherlode, produced entirely by Ice Cube and Sir Jinx, arrived the following year, as did another Cube-related project, I Wish My Brother George Was Here, the debut from cousin Del the Funky Homosapien. Moreover, Cube made his widely praised acting debut in John Singleton‘s groundbreaking urban drama Boyz N the Hood, titled after the song he wrote, filmed in his native South Central Los Angeles.

Cube‘s first album may have been controversial, but its reception paled compared to that of his follow-up, Death Certificate. Released in October 1991, just after the debut went platinum, Death Certificate was more political, antagonistic, and vulgar than its predecessor, causing more scrutiny and outrage. In particular, “No Vaseline,” a vicious attack on N.W.A and Jerry Heller, was perceived as anti-Semitic, and “Black Korea” was taken as an instruction to burn down Korean-owned grocery stores. The songs provoked a condemnation from the trade publication Billboard — the first time an artist had been singled out by the magazine. None of this prevented the album from reaching number two and going platinum with momentum maintained well into 1992 by “Steady Mobbin’,” a Top Ten rap hit. During 1992, Cube also performed in the second Lollapalooza tour to consolidate his white rock audience, executive-produced Da Lench Mob‘s radical Guerillas in tha Mist, and that December appeared in Trespass and released The Predator. Cube‘s third album, The Predator, became the first to debut at number one on both the pop and R&B/hip-hop charts. Promoted with three Top Ten rap singles — the ferocious Los Angeles riots response “Wicked,” the steady-rolling “It Was a Good Day,” and the Das EFX collaboration “Check Yo Self” — the album eventually went double platinum.

Lethal Injection, Cube‘s fourth album, was released in December 1993 and became the rapper’s third straight LP to debut within the Top Ten of the pop and R&B/hip-hop charts. Its biggest single, “Bop Gun (One Nation),” paid tribute to the enduring influence of Parliament–Funkadelic and featured leader George Clinton. By the end of that year, Cube‘s production discography included more material from Yo-Yo, as well as Kam‘s Neva Again. Having released four albums in four years, Cube took a break from making solo LPs, but during 1994 reunited with Dr. Dre for “Natural Born Killaz,” recorded for the Murder Was the Case soundtrack. Also that year, the November release Bootlegs & B-Sides bundled stray cuts. Cube was visible as ever throughout 1995. He acted in Singleton‘s film Higher Learning, wrote and starred in the cult classic stoner comedy Friday, and appeared on tracks by Westside Connection partners Mack 10 and WC. Bow Down, Westside Connection‘s first album, followed in 1996, narrowly missed the top of the pop chart, and went platinum on the strength of the hits “Bow Down” and “Gangstas Make the World Go Round.” In 1997, Cube starred in the action thriller Dangerous Ground and in the surprise hit horror film Anaconda, and contributed music to the soundtrack of the former, including “The World Is Mine,” joined by K-Dee and Mack 10. Another anthology, Featuring…Ice Cube, was out that December.

The Players Club, Cube‘s directorial debut — which he also wrote — premiered in 1998, promoted with a Top Ten soundtrack featuring his own “We Be Clubbin’.” That November, just after he made a featured appearance on nu metal leaders Korn‘s “Children of the Korn,” Cube‘s solo LP dry spell was broken with War & Peace, Vol. 1, the source of another rap number one, “Pushin’ Weight,” and an additional Korn collaboration, “Fuck Dying.” Like all his previous LPs, it went platinum. Film work resumed with Next Friday, written and produced by Cube, who also reprised his starring role from the original and was present on the soundtrack. War & Peace, Vol. 2, containing a collaboration with Dr. Dre and MC Ren on “Hello,” followed in March 2000 and completed his prosperous phase with Priority Records, swiftly summarized with Greatest Hits in 2001. Between studio albums, Cube devoted most of his creative energy to films. David O’Russell‘s Three Kings, John Carpenter‘s Ghosts of Mars, and Tim Story’s Barbershop, as well as a third Cube-written Friday film, Friday After Next — among several other titles — all appeared in theaters before he returned to music with Westside Connection‘s second album, Terrorist Threats, in December 2003.

Signed to EMI, Cube lengthened his solo discography in June 2006 with Laugh Now, Cry Later. In the Movies, a compilation of soundtrack cuts, was put together by Priority for a 2007 release. The following August, Cube returned with Raw Footage, his seventh consecutive solo studio album to enter the Billboard 200 and R&B/hip-hop charts within the Top Ten. Yet another catalog title from Priority, The Essentials, appeared in 2008. Cube‘s September 2010 effort I Am the West was a family affair, with sons Darrell Jackson (aka Doughboy, named after Cube‘s Boyz N the Hood character) and O’Shea Jackson, Jr. (aka OMG) among the guests, who also included longtime associate WC. By the end of 2011, Cube had also acted in and/or produced a multitude of projects for the large and small screens, including Are We There Yet?, Beauty Shop, Friday: The Animated Series, and The Longshots.

In 2012, Cube announced the imminence of a tenth solo album, Everythangs Corrupt. Despite several singles issued across 2013 and 2014, its release was delayed as Cube focused on film and television pursuits, as well as the legacy of N.W.A. Along with Dr. Dre, Cube worked on a biopic about the origin and rise of the trailblazing group, with son O’Shea Jackson, Jr. cast to portray him. Named after their breakthrough album, Straight Outta Compton was released in 2015 to critical acclaim. The film made over $200 million worldwide, and was nominated for an Academy Award in the category of Best Original Screenplay. The film inspired Dr. Dre‘s solo album Compton, which included Cube on the track “Issues.” A Rock and Roll Hall of Fame induction followed for N.W.A in 2016. A 25th anniversary reissue of Death Certificate was released the next year by Interscope, Cube‘s new home. The week of the 2018 midterm elections, Cube issued the single “Arrest the President,” a prelude to the characteristically scathing, humorous, and funky Everythangs Corrupt, which finally arrived the next month.