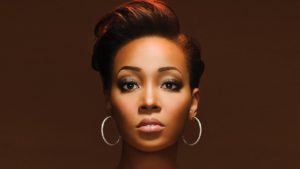 Beep, beep, beep – An alarm sounds. Lights flash. Everyone is on alert. Emergency protocol in effect. It’s a Code Red state of emergency. Soul music is in trouble and one of the greatest R&B singers of a generation is sounding the alarm. Whispered voices have been expressing their concern for some time. Industry insiders talk of a change in the musical direction at radio. Critics blame millenials. Millenials blame the music. Artists blame each other. And everyone blames the Internet. But that’s not the whole story. Soul music is alive and well and “people love it when introduced to it properly,” R&B/Pop icon Monica explains. However, concerned about the future of the genre she loves so much, Monica returns with her seventh studio album appropriately titled Code Red.

“As an artist and real genuine soul/R&B lover, I felt that it’s a state of emergency for the music. Its important for this generation to know and understand how important the music was and is to the world and we are best when we can bridge the sound between the old and the new,” Monica says. The Grammy Award winning singer knows this better than anyone.

Monica will inarguably be remembered in music as one of the most iconic soul singers of a generation. Her enviable resume detailing extraordinary musical contributions that started professionally at the tenderfoot age of 12 when her first major label deal was signed.

Monica’s musical journey started in College Park, Ga., when she began performing with a traveling gospel choir, following in her mother’s footsteps, an incredible church singer herself. While honing her craft competing in as many local talent shows she could find, Monica was discovered by hitmaker Dallas Austin, signed to Arista Records’ distributed label, Rowdy Records and by thirteen became the youngest artist ever to score two back-to-back Billboard #1 chart-topping hit records with “Don’t Take it Personal” (Just one of dem Days) and “Before you Walk Out of My Life.” By the end of 1995, she had taken the world by storm with her unstoppable debut album, “Miss Thang.” Her next album, the 1998 record-breaker “The Boy Is Mine,” was a crossover pop juggernaut as the result of her duet with Brandy; the Rodney Jerkins produced song of the same name. The single spent thirteen weeks at #1 on the coveted Billboard chart, earning Monica her first Grammy Award to add to her already growing collection of Billboard, American Music and Soul Train awards. “The Boy Is Mine” album would feature two more Billboard #1 hits –“Angel of Mine” and “The First Night”– and would establish Monica as a bona-fide superstar and one of most successful artists of the entire decade. Over the next ten years Monica would release four more Billboard chart-toppingalbums “After the Storm,”“The Makings of Me,”“Still Standing,” and “New Life.” In all, she has sold more than 25 million albums worldwide and she holds the record as the first artist to top the U.S. Billboard R&B/Hip-Hop Songs Chart with No.1 songs over the span of three consecutive decades (1990s, 2000s and 2010s), which puts her in the elite company of history-making superstars such as Michael Jackson, Janet Jackson, James Brown and Marvin Gaye, all sharing similar accomplishments. She’s acted on stage and in feature films, contributed to the hit NBC show, “The Voice,” and witnessed her life documented in the BET reality show, “Monica: Still Standing.” And in 2010, Billboard Magazine listed Monica at No. 24 on it’s list of the Top 50 R&B and Hip Hop Artists of the past 25 years.

So what’s left to prove and why now? The answers are extraordinarily simple: Nothing and it was time. After a few years off from recording and touring, Monica felt that her family life had reached a point where it could sustain the rigors and demands of her career. “My family takes precedence over everything. Once I really got everybody comfortable – Kids in school, prepping for the days they had whether it be with sports or all the different activities that they love and my daughter was walking and talking, that’s when I really started working on the album,” Monica recalls. “My children didn’t ask to be the children of an entertainer so never do I want them to feel secondary to it…In the midst of me being a mom and a wife, there’s so much more substance there when I do come back as an artist.”

Due in-stores and online later this year, Code Redis indeed a jubilant return to form for the iconic star. The lead single, produced by hitmaker Polow Da Don is an updated take on a Smokey Robinson and the Miracles classic (Much Better Off); “Just Right For Me,”featuring Lil’ Wayne, serves as a perfect introduction to the album and is a bridge between Monica’s love of classic soul music, 90’s R&B and the sound of today. Another standout on the album is the uber-personal tune, “I Miss Music.” It is somewhat of a tribute to the memorable music of the 80’s and 90’s and the rare artists that created it. “I Miss Music,” is an infectious record. It was an instantaneous attraction for Monica. “I was born in the midst of the most incredible age of music. This song speaks to that era and reflects on how important the music was to me,” Monica explains. When I mention Whitney’s name in the song, I still get chills through my body. She wasn’t only my mentor. She was my friend. This song is all about substance and feel and that’s what means the most to me.”

“The song ‘Hustler’s Ambition,’ featuring Akon, is one of my absolute favorite records that I have ever recorded,” Monica details. The record captures the feeling of missing someone but keeping the emotional fire burning while he’s away. Surely a parallel for Monica and her husband, NBA player Shannon Brown and their intense opposing work schedules.

“This album is about my journey. As a person I’m complete. I’m a complete woman now. I’m complete as a mom. I see my children happy, enjoying their lives, living and learning. I’m complete as a wife. I understand who I am. I know my shortcomings and I accept those just as much as I accept my strengths. As an artist, I’m a lot more seasoned and comfortable in my own skin. I understand there are artists that will do different things than me. They make take different paths in promoting and creating but there’s only one Monica.

Indeed since her dominant debut in 1995, there’s always only been one Monica.