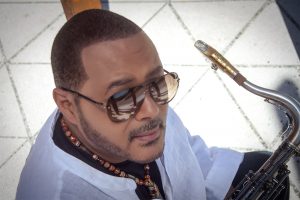 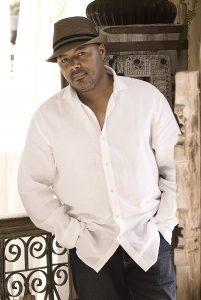 Grammy nominated saxophonist and flautist, Najee has made a career following his heart and keen musical intuition by pushing musical boundaries, all of which have made him an international pioneer in the music industry. Having collaborated with everyone in the music business from Prince, Quincy Jones to Stevie Wonder, Chaka Khan and Herbie Hancock, Najee’s technical agility, grace, compositional prowess, unbridled passion and fearless genre bending have made him one of the most sought after musicians of his generation. With two Platinum and four Gold albums under his belt, Najee is an icon whose musical vision spawned an entire new genre by fusing the music close to his heart (R&B and Jazz).

Born in the Greenwich Village in New York City and raised in Jamaica, Queens; an alumnus of the New England Conservatory of Music, Najee was mentored by jazz giants Frank Foster and Jimmy Heath as well as classical maven and flutist Harold Jones of the New York Philharmonic. When he emerged onto the scene with his soulful R&B, and jazz fused sound, with songs such as “Najee’s Theme,” “Sweet Love” and “Betcha Don’t Know,” it was not long before his trademark soprano found a home at the top of the charts and he carved out his own unique niche in the musical landscape. “My first love was the tenor saxophone and flute,” confides Najee. “It was my brother Fareed who got me to play soprano saxophone. We would argue over me not wanting to play soprano. Then one day someone gave me a soprano saxophone and I played on his songs. That began my soprano saxophone career and little did I know then, that would be the instrument to make me popular. As I began to develop on my instrument, John Coltrane, Charlie Parker, Yusef Lateef, Grover Washington Jr. and Hubert Laws on flute were some of the artists that inspired me. As an industrious and hungry young musician, Najee had the good fortune of coming through Dr. Billy Taylor’s now legendary Jazzmobile program. While a student at the New England Conservatory (where both Najee and his brother attended) he studied saxophone performance with Joe Allard and performed with George Russell and Jaki Byard big bands. After his studies at the conservatory, Najee returned to New York in the early 80s and was lucky to land a gig with Chaka Khan along with his brother and guitarist Fareed (who is now his manager).

In 1986, Najee’s Theme, was released and the saxophonist earned a slot on tour with singer Freddie Jackson. The following year, Day By Day was released, and in 1991, Tokyo Blue, which is one of Najee’s most successful and enduring recordings. Tokyo Blue (which was produced by Najee’s brother Fareed) and Day By Day both went Gold and led to two Soul Train Awards for Najee (Best Jazz Artist in 1991 and 1993). Just An Illusion came in 1992 and around this time he collaborated with such iconic figures as Quincy Jones and jazz greats Stanley Clarke, Billy Cobham and Larry Carlton which resulted in the album Live At The Greek. Following his collaborative live album, his next album Share My World was released in 1994 and was followed in 1995 by a critically acclaimed tribute to Stevie Wonder’s 1976 classic, Songs In The Key Of Life. The CD was produced by George Duke and features Herbie Hancock and Sheila E. among others. His CD Morning Tenderness was released in 1998 and went to #1 on the contemporary jazz charts. Also released the same year was The Best of Najee, and his tour with the USO for the troops in the Mediterranean: Spain and Turkey.

For Najee, the late ‘90s were marked by extraordinary international experiences, from performing at Nelson Mandela’s birthday celebration in South Africa to playing as a special guest of President Clinton at the White House at an event honoring President Jerry Rawlings of the Republic of Ghana. Najee also spent two years of touring (2001-2003) with Prince and appears on Prince’s albums “Rainbow Children” and “One Night Alone”. In 2003 Najee released Embrace featuring special guests Roy Ayers and BeBe Winans. My Point Of View was his follow up in 2005 featuring his good friend and vocalist Will Downing. In 2006, Najee won an NAACP Image Award for “Best Jazz Artist”. 2007’s Rising Sun, joined Najee with Phil Perry and Mind Over Matter, from 2009 paired Najee with singer Eric Benét. 2012 saw the release of Najee’s critically heralded The Smooth Side Of Soul. In 2013, Najee released his second recording for Shanachie Records, The Morning After – A Musical Journey; which earned him a NAACP Image Award Nomination for “Outstanding Jazz Album” (2014) and Soul Train Awards Nomination for “Best Contemporary Jazz Performance” (2014). In 2015, he released You, Me And Forever, an inspired collection of songs that charted #1 Most Added Song on Billboard and Smooth Jazz charts.

Najee’s new offering Poetry In Motion (August 25, 2017), is dedicated to two ground-breaking musicians who Najee has had the distinction of working with – Prince and Al Jarreau. “Both artists in their own way have changed the culture of music forever,” shares the saxophonist. “Whenever I have worked with people of their caliber of artistry, I have always walked away with something that helps to shape my musical conversation.” Produced by Barry Eastmond, Poetry In Motion finds Najee nothing short of inspiration, as he calls upon a few all-star friends to create a dialogue well worth remembering. Najee’s fourth recording for Shanachie unites him with such dynamic musicians as Will Downing, Maysa, Eric Roberson, Incognito, Bobby Lyle, and Blake Aaron.

Poetry In Motion opens with the buoyant and luminescent “Stratosphere,” showcasing Najee’s soaring, warm and supple soprano saxophone. Najee penned the intoxicating and inviting original with Barry Eastmond who lends his piano and compositional skills to several tracks on the CD. Eastmond has produced and collaborated with everyone from Al Jarreau and Anita Baker to Freddie Jackson and Brandy. “I’ve known Barry for a very long time and working with him was one of the greatest joys of recording this album,” shares Najee. The irresistible and fun loving “Is It The Way” features singer Eric Roberson. “Eric is one of the brightest young R&B vocalists, producer, songwriter and performer in our industry and it was an absolute pleasure to have him contribute his gift on this record,” shares Najee. Roberson’s soulful vocals gel perfectly with Najee’s bluesy soprano and Eastmond’s buttery keys. Poetry In Motion also finds Najee collaborating with the brilliant producer, multi-instrumentalist and Incognito mastermind Jean-Paul “Bluey” Maunick. “Bluey is one of the greatest people to work with in the studio,” shares Najee. “He is unique in his approach to getting the work done.” Indeed Najee, Bluey and Incognito get the work done on the tour-de-force dance-floor number “Let’s Take It Back.” Najee changes the pace with the seductive and Latin-tinged “Noche Romantica,” the perfect platform for the saxophonist to shine a spotlight on his gorgeous tone and impeccable phrasing. The syncopated intro with Najee on his flute calls to mind Chick Corea’s “Spain,” while his passionate and emotive tenor saxophone at times is reminiscent of the longing tenor of Gato Barbieri. Najee enlists the “Prince Of Sophisticated Soul,” Will Downing for the moving “We’ll Be Missing You.” He shares, “Over the years we have worked together on several records and have performed around the world. I could not have made a better choice to write and perform a song that honors Al Jarreau and Prince.” Downing also came up with the title of the album. The song “Poetry In Motion,” is a memorable number that showcases Najee’s agile flute and Bobby Lyle’s funky and groove-heavy piano. “Song For The Ladies,” will no doubt delight Najee’s female devotees. The sweet R&B flavored ditty with a new jack swing is hard to resist. The Grammy-nominated and dynamic vocalist Maysa adds her sultry and honey-toned alto to “Don’t Make Me Wait” which she co-wrote with Najee. The chemistry that Maysa and Najee share is undeniable. “Maysa is my sister musically speaking,” shares Najee. “She is truly one of the best and most versatile vocalists in the music industry.” A highlight on Poetry In Motion is the song “Running Away.” It’s air-tight groove, synergistic interplay and boundless joy make for one of the album’s defining moments as Najee is joined by guitarist Blake Aaron and guitarist Randy Bowland, who penned the tune originally for Jill Scott. The album comes to the perfect close with the gorgeous flight of fancy “Duology.”

With the release of Poetry In Motion, Najee concludes, “Making music at this point in my career is still exciting and I am always evolving. As a musician the love of performing for people whether in studio or live is still a gratifying experience. The best feeling to me is presenting something new to the world!”