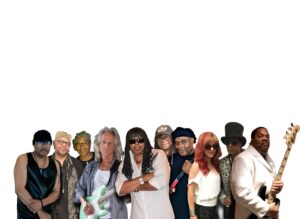 Grammy and American Music Award Winning Platinum and Gold Record Producing. Considered by many of their peers as being one of the greatest live-performing Funk/Rock Bands ever to hit a stage! An adrenaline rush of pure unabashed raw energy!! The Stone City Band is ready to “Fire Up That Funk!!”

Formed in 1978 by The King of Punk Funk, Rick James. The Stone City Band served as Rick’s exclusive recording and touring band from the beginning and through the height of his career. They were responsible for cranking out the memorable sounds to timeless hits such as “You and I’, “Super Freak,” “Mary Jane.” Bustin’ Out,” “Ghetto Life,” “Fire and Desire.” The Temptations’ “Standing on the Top,” The Mary Jane Girls “All Night Long,” “Boys,” “In My House,” and many, many more.

This legendary band not only have released their own albums under Motown’s Gordy Label but for more than two decades, have provided the sounds that have been heard on recordings and tours with Rick James, MC Hammer, Teena Marie, The Mary Jane Girls, The Temptations, Eddie Murphy, Smokey Robinson, New Edition and Bobby Brown to name a few.

Their musical performances can be seen on The Grammy’s, The American Music and Soul Train Awards, as well as appearances on the Arsenio Hall, Tonight with Jay Leno and Lopez Tonight Shows, Saturday Night Live, Dick Clark’s Rockin New Year’s Eve, and countless more. Countless samplings are used by many of today’s Hip-Hop artists. You can watch a TV commercial or listen to your radio on any given day, and you will hear that distinctive signature sound of Rick James’ Stone City Band. Pulsating bass lines and irresistible rhythms!!