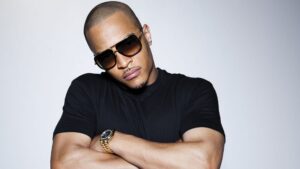 Labeled Jay-Z from the South by Pharrell Williams, T.I. unquestionably possesses all the qualities needed to receive such a title looking at the superb talent and skills he has shown through his growing career in American music industry. A native of Atlanta Georgia born Clifford Joseph Harris Jr. on September 25, 1980, T.I. has been rapping since he was still a nine-year-old boy. He then signed a deal with Arista Records subsidiary LaFace Records at the age of merely nineteen. Initially going under the moniker of T.I.P., a version of his childhood nickname Tip, he later shortened it to T.I. out of respect for fellow rapper Q-Tip who also joined the company as its recording artist.

His debut album, “I’m Serious”, afterwards was released in October 2001 and did moderately well as it managed to enter the top 30 of Billboard Top R&B Hip-Hop chart, evoking people to begin taking notice on him. However, instead of continuing the mutual cooperation with the label, this young rapper decided to go quit shortly thereafter to establish his own recording company, Grand Hustle. He produced his underground CD of “In Da Streets” which surprisingly sold for about 20,000 copies. Also receiving quite a buzz due to the high TV airing of his collaboration with Bone Crusher in the latter’s hit single, “Never Scared”, T.I.’s name was brought to other music records’ attention.

Choosing to join Atlantic Records, T.I. did not waste any time to work on his subsequent album and quickly came up with “Trap Muzik” on August 19, 2003. All his perseverance plus dedication were proven really worthy when the sophomore effort rocketed to the fourth rank of The Billboard Hot 200 chart and number two on Billboard Top R&B Hip-Hop chart. Bolstered by catchy yet gritty tunes of “24’s”, “Rubber Band Man,” and “Let’s Get Away”, the record found no difficulty in scoring tremendous sale number to finally earn Platinum status from RIAA. This attainment unmistakably propelled the charming fellow to national prominence, making him one of the South’s most electrifying young rappers in that year.

Aiming to strive harder with his next project, T.I. carefully constructed his new materials while cleverly assembled collaborations with other hip-hop artists, such as B.G., Nelly, Lil Wayne, plus Mannie Fresh. Entitled “Urban Legend”, this third major album was then launched by August 2004 to encounter a magnificent outcome. It topped Billboard Top R&B Hip-Hop and secured the seventh rank on the Billboard 200 in the first week of release. Sold over 1.3 million copies in U.S alone, it subsequently was certified double Platinum within a short time, becoming the fastest-selling album in history by South artist. In the meantime, the record also generated several hits, namely “Bring Em Out”, “U Don’t Know Me”, and “ASAP”, which all charted in the top 20 of Hot R&B/ Hip-Hop Singles & Tracks.

Following this tremendous achievement, various prestigious accolades showered T.I. continuously, most notably that of a Grammy nomination for Best Rap Solo Performance through single “U Don’t Know Me” in 2006. Also marking the year with his foray into film industry through a Warner Bros production of “ATL”, T.I. continued his path in mainstream hip-hop confidently under the self-proclaimed nickname of King of the South. He constructed his next work entitled “King” which had been scheduled for a March 28, 2006 release. “This album is a solidification of why I call myself the ‘King of the South,’ why I’m known as that, and a continued progression of what I’ve done musically and with my career,” he said firmly. “King” debuted at number one on the US Billboard 200 chart, selling over 522,000 copies in its first week of release in the United States.

T.I.’s movie career also continued in slower pace. He joined the cast ensemble of “American Gangster” which was released in 2007 to rave reviews. In the same year, Forbes Magazine announced its first ever Hip-Hop Cash Kings list with the top 20 hip-hop earning artists for the previous business year. T.I. entered this list three times, thanks to his albums and movie appearances.

In 2007 he was back with fifth studio album “T.I. vs. T.I.P.” which he considered as the most conceptual album of all. Released on July 3, this album introduced the ‘other half’ of him that fancies rapping, T.I.P. Showing seriousness, he tapped rapper Eminem to back him up in this new LP. Sadly, while promotion for this album was still going on, he was arrested on October 13 by agents of Bureau of Alcohol, Tobacco, Firearms and Explosives (ATF) for possessing illegal guns after being caught on attempt to buy illegal machine guns and silencers through a bodyguard-turned-informant. His arrest, which occurred only hours before the BET Hip-Hop Awards show, saw him charged with two felonies; possession of three unregistered machine guns and two silencers, and possession of firearms by a convicted felon. Facing 30 years in jail if convicted of both charges, T.I. walked out of the federal courthouse in downtown Atlanta after posting a $3 million bail; $2 million in cash bond and $1 million in property. He was then placed under house arrest, prohibited from going out of his house except for medical appointments and court appearances. The only people allowed to live with him were his girlfriend and children, with other visitors requiring approval from the court.

Despite this unfortunate ordeal, he kept his spirit high by announcing to his fans that he was working on a new album while on house arrest. The album, which was released September 30, 2008, was titled “Paper Trail”, a reference to the method he used in writing the materials. Unlike his previous projects, T.I. was back to the traditional pen and paper instead of technology generated sound from studio in the six songs he had written. Like its predecessor, “Paper Trail” debuted at number one on the Billboard 200, selling 568,000 copies in its first week, becoming T.I.’s highest debut sales at that time. During the 51st Grammy Awards, he was nominated for four Grammy Awards, eventually winning Best Rap Performance by a Duo Or a Group for “Swagga Like Us”.

T.I.’s past legal trouble ended him in prison for a year and a day. It was also determined in March 2009 that he was to pay $100,300 for federal weapons charges. Before he began serving time in Forrest City, Arkansas, T.I. performed a farewell concert at the Philips Arena in Atlanta, Georgia. He was released from jail in December 2009 and then moved to halfway house. He was a free man by March 26, 2010 but was subject to drug counseling, DNA testing, and random searches of his property.

Soon after his release, T.I. geared up the work of his seventh studio album. Inspired by his life behind bars, T.I. worked with Jim Jonsin and Trey Songz among others. The first promotional single “I’m Back” was released on March 8, 2010, peaking at #44 on Billboard’s Hot 100 charts. T.I. then changed the title of the album from “King Uncaged” to “No Mercy” upon the album’s release on December 7, 2010. The album debuted at number four on the US Billboard 200 chart, selling 159,000 copies in its first week in the United States. T.I. was nominated for two Grammy Awards for Best Rap Solo Performance for “I’m Back” and Grammy Award for Best Rap Performance by a Duo or Group at the 53rd Grammy Awards.

T.I. and former Xscape member Tameka “Tiny” Cottle whom he had been dating for more than 8 years at that time, got married on July 30, 2010 in Miami Beach, Florida. They have had two sons Clifford “King” Joseph Harris III, born August 25, 2004, and Major Philant Harris, born May 16, 2008. Their daughter was a stillborn six months into the pregnancy. Two months after their wedding, the couple was arrested on drug charges in Los Angeles. T.I. was consequently sentenced to 11 months in prison for violating the terms of his probation but his drug charges were dropped in October that year. T.I. reported back to the Forrest City Federal Facility to serve his 11-month sentence. He was released from the facility on August 31, 2011 and was sent to a community living facility.

While he was still in prison, T.I. had announced that he was working on a new album and a novel. However, he was sent back to federal custody on September 1, less than 48 hours after his release due to a dispute involving T.I. taking a luxury bus from a prison in Arkansas to a halfway house facility in Atlanta. Since the dispute was not drug related, T.I. was later released from prison and was sent back to the halfway house, where he was released on September 29 midnight.

His new album, “Trouble Man: Heavy Is the Head”, was led by the single “I’m Flexin’ ” which was released in September 2011. The song peaked at number sixty-six on Billboard Hot 100. In 2012, he released other singles such as “Go Get It” and “Ball” in the span of six months. The rapper also starred in a new reality show titled “T.I. and Tiny: The Family Hustle” for VH1. The show was renewed for a second season after gaining a moderately successful rating. He also began promoting his second book “Trouble & Triumph” in September 2012. The next month, he previewed twelve tracks from the album at its listening party in New York City, and also revealed their titles. “Trouble Man: Heavy is the Head” was released on December 13, 2012 with announcement that a sequel titled “Trouble Man: He Who Wears the Crown” would soon follow.