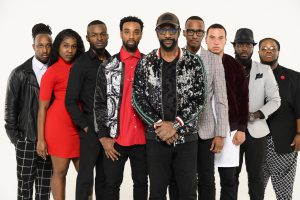 As an irresistible force of social and cultural change, this Motown icon made his mark not just on the music industry — but society at large.

McClary was part of a new musical group that was both authentic and
groundbreaking and created a sound that the world had never heard
before – one that was real, raw, and unbelievable. This was a sound that captured America and resonated around the world. The group is credited with seven number one songs; a host of top ten Billboard hits and their vast catalog includes more than 50 albums with more than 120 million units sold.

McClary played an intricate role in creating the essences of the Commodores sound with his funky, rock flavored, smooth intimate guitar licks and his collaboration with Lionel Richie. Together they wrote over two thirds of all the songs recorded by The Commodores. Lionel once referred to the Richie / McClary writing team as “the Paul McCartney and John Lennon of The Commodores”. A little wishful thinking, but it certainly challenged the group to set the bar high. In fact, McClary would often remind the guys “remember, we are the Black Beatles”. What seemed at the time to be just a mere slogan later became reality.

In 1974, The Commodores broke the Beatles attendance record at the
Araneta Coliseum in the Philippines. This happened after the first album “Machine Gun” made history by becoming the first gold album sold in the history of Motown Records. This writing team wrote hits such as: “Brickhouse”, “Slippery When Wet”, “I Feel Sanctified”, “Too Hot To Trot”, “Flying High”, and “High On Sunshine” just to name a few. McClary’s guitar licks on The Commodores smash “Easy” have been hailed as one of the best solo guitar performances of all time. Whether it’s “Sail On”, “Three Times A Lady”, “Just To Be Close”,” Zoom”, “Oh No”, “Lady You Bring Me Up”, “Sweet Love”,“This Is Your Life”,” Still”, or the smash instrumental hits “Machine Gun”and “Cebu”.

It all began in 1967, when Thomas McClary came to Tuskegee University from Eustis, Florida pursuing a degree in Business Administration. While standing in the registration line, he met Lionel Richie who was whistling the song “Listen here” by Eddie Harris. Thomas asked Lionel if he was a musician, introduced himself as the man on a mission to put a band together. The two colleagues began recruiting other musicians to form “The Mystics”. Members from the Mystics merged with another Tuskegee based group called “The Jays” to form The Commodores.

The Commodores big break came after touring for two years as the
opening act for the red hot Jackson 5, in 1972-73. McClary co-wrote 60% of all the Commodore songs. Some of the best-kept secrets about McClary are now about to be revealed. Did you know?
McClary co-wrote with Lionel Richie 60% of all the Commodore songs. Did you know that Thomas McClary collaborated with Lionel Richie and Diana Rosson the “Endless Love” sound track and the Kenny Rogers project; wrote and produced songs for The Four Tops; The Temptations; WhitneyHouston; Melissa Manchester; Miles’s Davis bassist, and Michael Henderson.
He also produced a number one hit on a new group named Klique, “Stop Dogging Me Around”.

Did you know that McClary and The Commodores toured with The Rolling Stones, Bob Marley, Guns & Roses, The Beach Boys, Stevie Wonder, The Jackson Five, and Tina Turner. These are just a few of the best kept secrets about the four-time Grammy nominated song writer and producer, the first Commodore himself, Thomas McClary.

After taking some time from touring and recording to spend with his family, and to fulfill philanthropic goals to volunteer and support worthy non-profit organizations such as Shepherd’s Hope and Celebs 4 Kids- he’s back. The man who started the band that started it all, with unparalleled high energy you won’t forget– introducing his cutting edge band: Thomas McClary’s Commodores which has sold out audiences everywhere creating a ground swell of excitement that’s just contagious.