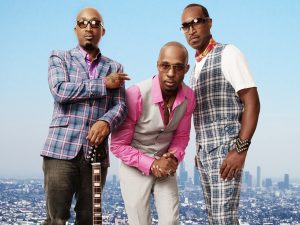 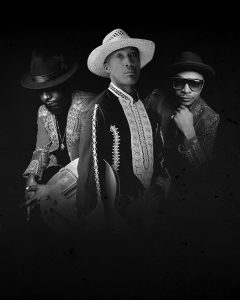 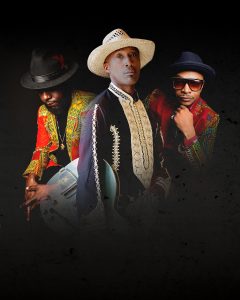 Making their ascendance into the annals of music history during the late ‘80s and throughout the 1990s, the R&B group known as Tony! Toni! Toné!, were somewhat of a rare breed during the height of their chart-making success. As Hip-Hop artists began to dominate the airwaves and musician-formed bands started to dissipate. Yet the Tonys actually thrived, by releasing four seminal albums that help to define the R&B genre, and with classic songs that continue to still be in rotation on radio stations today.

It’s been more than 25 years since the Oakland, California-bred band was formed.  Tony! Toni! Toné! was birthed out of family. The band is currently comprised of guitarist/vocalist D’wayne Wiggins, his cousin drummer Timothy Christian Riley, and cousin, Amar Khalil on vocals. Khalil took over as lead vocalist upon the departure of Wiggins’ brother Raphael Saadiq.

Currently, the band is gearing up for the long-awaited release of its 5th studio album, slated to drop in 2015. The project’s first single, “It’s A Beautiful Thing,” is featured with both slow and up-tempo versions that will be utilized in the song’s accompanying video.  And to cover all bases, they will also release an electric dance mix.  “The single is going to take people for a spin,” says Wiggins. “It feels like Al Green meets the Beatles. We even have a version called the Al Green remix. Tony! Toni! Toné! has always been known to take chances, and we definitely are stretching artistically with this song.”

The Tony’s have been collaborating with a number of partners to help market and promote their new project. The band has partnered with Cyber Star Media, an online distribution company that will distribute the Tony’s new music along with their roster of independent artists they are developing. The distribution channel is also available to outside artists looking for added promotion. Cyber Star Media offers label services, such as packaging, production services, video production, image consulting, marketing services: online and physical, publishing, mixing, mastering and branding.

“I feel revived because I’ve had a lot of years to beef up and groom for the independent marketplace, especially after being on a major label for so many years,” says Wiggins. “It takes a partnership–a collaboration of people that you can trust to come together and do a good job and be successful in this business. I’m really excited about our future endeavors with our new digital and marketing partners.”

The Tonys have also partnered with the New York Rock Exchange, an online music marketing company that allows individuals to buy into and own a piece of the artist’s music.  New York Rock Exchange will offer official stock certificates, (Shares) that are numbered and personally autographed by the Tonys.  The Share also offers fans special benefits such as two online meetings via Skype with the Tonys where fans can speak directly to group members and be involved in the bands decision-makings on upcoming projects. Fans will also have access to a free download to special edition music, along with updates on the group’s tours, appearances, and more. The Tonys will be offering exclusively through the New York Rock Exchange, a 12″ Limited Edition white Vinyl of their new single, “It’s A Beautiful Thing,” in addition to a Special Collector’s Edition Box Set of their four signature albums.  All in time for Christmas, 2014.

Today, the Tonys continue to be a consistent touring act, performing their classic hits in concert venues within the U.S. and around the world. They have committed their time and expertise to philanthropic work for the neighboring communities in Oakland. Through their foundation, Oakland Youth Aid, established in 1988, the group provides needy kids in the community with after school programs, violence prevention forums, and education in the arts and entertainment industry. The foundation has provided hundreds of kids with backpacks, piano and guitar lessons, along with social and life coaching.

A docu-series is slated to chronicle the careers of the Tonys and show the group as they are “Here and Now”.  Also expect “Big” announcements from the Tonys and their plans to branch out into other media platforms in the upcoming months.