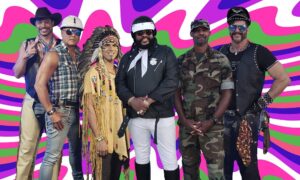 Village People is one of the most iconic music groups in the world. Their music is part of the international songbook and featured in dozens of major motion pictures, on Broadway, and in commercials. Of course, “Y.M.C.A” (along with its namesake dance) is played at almost every party, wedding, bar mitzvah and sporting event in the world.  They’ve sold over 100 million records worldwide.

The debut album, released in 1977 featured the hit singles “San Francisco (You’ve Got Me),” and “In Hollywood (Everybody is a Star).  At that time however the group was simply Victor Willis with use of session background singers.  Auditions were held and a group of characters were assembled around Willis for a 1977 television appearance on American Bandstand.

Soon Village People was a real group (not just Victor Willis). Live musicians were added for tour purposes.  The group was soon an international phenomenon.  A second album Macho Man, was quickly released, followed by a third album titled Cruisin which featured the blockbuster hit “Y.M.C.A.”  Next up was the Go West, the fourth album featuring the hit “In the Navy.”  This was followed by the group’s sixth album in 1979 titled, Live & Sleazy which featured Willis performing all the hits, live from the Greek Theatre.

In November 1979, Willis exited the group during filming of the Can’t Stop the Music movie and motion picture soundtrack.  This marked the group’s first album to not be certified gold by the RIAA coinciding with Willis’ exit.

The disco era ended, and Village People soon disbanded.  Willis returned to the group in 1982 to record the Fox on the Box album.  He soon exited again.

Willis returned once again as lead singer in 2017 leading up to the group’s 40th anniversary. Village People’s iconic cop and writer of the group’s biggest hits, including “YMCA,” “Macho Man,” “Go West,” and “In the Navy,” was again at the helm with live musicians once again backing the group.

Since Willis’ 2017 return, Village People is now more popular than ever. The group returned to the charts in 2019 and 2020 with “Happiest Time of the Year,’ and “If You Believe,” both written by Willis and quickly becoming hits by breaking into Billboard’s Adult Contemporary chart top 20.